Prof. Kathy Bowrey (University of New South Wales) delivered CREATe’s second public lecture for the autumn 2021-22 series, in November 2021, which took place online. The title of the presentation was ‘The Society of Authors Meets Hollywood: Why authors and playwrights lost out’, and it was based on Chapter 5 of her book Copyright, Creativity, Big Media and Cultural Value: Incorporating the Author (Routledge, 2021). Dr Elena Cooper (Leverhulme Early Career Fellow, CREATe) convened the event, as with the last CREATe public lecture with Prof. Anjali Vats. 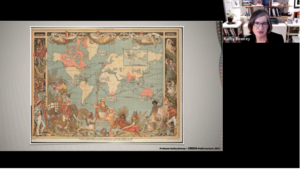 In order to better understand the nature of authorship and its contemporary issues, Bowrey implemented a thorough historical analysis of the relation between creators and the film industry, with an impressive interdisciplinary approach. Indeed, her investigation is not limited to intellectual property, but it also considers other aspects, such as the behaviour of corporates and cultural studies.

According to Bowrey, the examination of industrial authorship within the context of multinational corporations in the early 20th century can be helpful in understanding the current inequalities in the incomes of creators. After highlighting the main features of the trade of cultural production, Bowrey mainly focused her presentation on the Society of Authors, the legal framework, and the business infrastructure, enriching her presentation with literary examples and historical sources to explain the reason why authors and playwrights lost out, and what is the relevance of this today.

First, she explained the role of the Society of Authors from its creation in 1884, especially with regard to the promotion of authorship as a profession. Then, Bowrey emphasised the discrepancy between the Society’s idea of the author’s origination of the work – which was in line with the one of the Berne Convention – and industrial authorship. An early example of the latter can be found in Arthur Conan Doyle’s work. In fact, Doyle sought celebrity rather than the respect of romantic authorship. Accordingly, he was not interested in controlling the adaptations of his works, as long as his name appeared. Also, his attention to the audience and the market, as well as his strategic managing of copyright may be compared to the behaviour of contemporary multinationals, and this is the reason of his success.

Secondly, Bowrey analysed the impact of industrial authorship and the film industry on the legal framework. Statistics on the first films from 1896 to 1915 show that most of them were adaptations of literary or dramatic works, but before 1908 there was no exclusive right of adaptation into films. Only with the 1908 Berlin Revision of the Berne Convention, was the need for permission to adapt a story or script into a film established. Nevertheless, it was equally recognised that producers also deserved protection. However, the British transposition of the Convention did not benefit authors. Indeed, in Section 24 of the UK Copyright Act of 1911 the right to grant permission for adaptation of existing literary works into films was conferred to the current owner of copyright, which was in most cases the publisher.

According to Bowrey, the Society of Authors probably did not react because it did not consider the film market as its core business, but just as a spin-off market, which was not in line with the idea of professionalism the Society canvassed. In fact, professional playwrights were not really part of the Society, as they were mostly integrated in the theatrical community because they usually did not write books. Furthermore, there was an interesting divergence between playwrights’ obsessive control over the representation in the major cities’ theatres and the lack of concerns towards provincial stages. The reason why the Society of Authors accepted the role of publishers in the management of rights might have been the distance between the world of books and the one of plays. Otherwise, it might simply have been a surrender to the situation.

Moreover, although the US was not part of the Berne Convention at that time, filmmakers were negotiating rights in the UK due to the Anglo-American copyright agreement. This led to the creation of a film right clearance agency (1913) and of a new cinema subcommittee of the Society of Authors (1914). However, their main aims were limited to the prevention of conflicts especially with regard to titles, and the reduction of competition within the same geographical area. British authors found themselves in a disadvantaged position in facing the interests of publishers and American filmmakers, but despite this being unfair in their eyes, copyright law could not aid them. In terms of earning, there was a sharp gap between authors, depending on the probability of success of their stories, in addition to other factors. 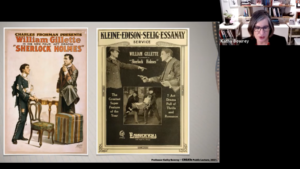 Hence, authors of pre-existing works (which formed the 70% of films) could only escape this losing out by contractually retaining rights, regardless of the terms of the Copyright Act. Nevertheless, the situation was even worse for screenwriters, who were the ‘Cinderella in the film industry’ (The Times, 5 July 1920). Indeed, they were industrial employee workers for the film production companies, not having any control or right over their creations. This should also be connected to the context of live representations because opportunities for playwrights were diminishing especially outside the most thriving centres for theatre (London and New York).

What can be deduced from this historical perspective is the increasingly high divergence between the ideal of author’s creativity, and the actual commercial relations. This also offers an interesting insight into the distortions of historical copyright, and the relation between authorship and innovation, which is still profitable today. The intent of Bowrey’s historical analysis is not to condemn industrial authorship, rather to develop a critical approach to contemporary relations, rethinking the role of storytelling and strengthening the personal connection between authors and their public, as Arthur Conan Doyle did.

A session of questions and answers followed the presentation, which highlighted the importance of legal history, as well as an interdisciplinary approach in critically analysing legal issues. Besides, the relevance and the features of 19th and 20th historical investigation were pointed out. Lastly, Bowrey commented on the criticalities of the Society of Authors, the role of the absence of competition law, and platforms. About the latter, Bowrey assessed the complexity of the issue, and the differences between platforms. For this reason, she argued that in this context it is crucial for creators to develop their professional identities, and to be supported by management expertise. Indeed, it helps them in connecting with the right audience, but also in understanding the brand, and new trends.

You can watch this public lecture here: