Professor Matthew Watson to give the first Glasgow Competition Talk of 2021-2022: ‘The Market’: The Economics and the Politics Underpinning a Key Domain of Legal Thinking

Professor Matthew Watson to give the first Glasgow Competition Talk of 2021-2022: ‘The Market’: The Economics and the Politics Underpinning a Key Domain of Legal Thinking

By Admin6 October 2021No Comments

This post was written by Magali Eben, Lecturer in Competition Law.

Every year, the University of Glasgow organises four Glasgow Competition Talks. These talks are aimed at expanding or deepening the curriculum of the competition law students in the School and provide interesting reflections by scholars and practitioners which may be of interest to anyone working in competition law, market regulation, or related topics. 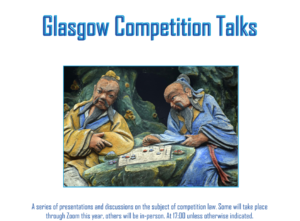 Our first speaker this year is Professor Matthew Watson, a Professor of Political Economy in the Department of Politics and International Studies at the University of Warwick.

Professor Watson wrote an intriguing book in which he unpacks the concept of ‘the market’. In his Glasgow Competition Talk, he will reflect on the lessons in his book for the purpose of competition law students. Competition law requires students to engage with lots of other disciplines, perhaps most notably with economics. Non-economists already talk about the economy all of the time, but the very familiarity of core economic ideas as they have taken hold in everyday life might be more of a hindrance than a help in understanding how competition law and economics interact. In this lecture, Professor Watson will talk about the obviously economic concept of ‘the market’, although interestingly it is a concept that is left largely implicit and undefined in modern economic theory. In many ways, competition law acts to protect the integrity of the market, and it is a short step from here to making the directly political statement that it exists to allow the market to do what the market does best. For most economists, this will mean ensuring that there are no distortions in the allocation of available economic resources, so that the economy can therefore work as efficiently as possible. This can very easily be translated into the political assumption that markets should be left to their own devices to decide for us how the economy should be organised. However frequently we hear such claims, though, we should be sceptical of them, for they suggest that ‘the market’ is capable of identifying its interest in allocative efficiency and of having the will to enforce that interest. Yet ‘the market’ is clearly not a sentient being able to act in the same manner as a conscious human agent. How might we therefore make sense of the translation from economics to politics of the concept of allocative efficiency to the assertion that ‘the market’ always knows best? Professor Watson’s book, ‘The Market‘, tackles this question by showing the very different ways in which the concept of ‘the market’ has entered economic theory, emphasising how recently it has been that the allocative efficiency definition of market dynamics has risen to prominence. Different economic definitions of ‘the market’ have different implications for competition law. This lecture will demonstrate the varied ways in which that relationship might impact upon students’ thinking as the competition lawyers of the future.

This talk will take place on Thursday 14 October, at 17:00, via Zoom. Email Magali.Eben@glasgow.ac.uk for the Zoom link, if you wish to attend.