CREATe contributes to ‘Crime, Enterprise and the Law’ panel at the British Crime Historians Symposium

CREATe contributes to ‘Crime, Enterprise and the Law’ panel at the British Crime Historians Symposium

By Elena Cooper29 September 2021No Comments 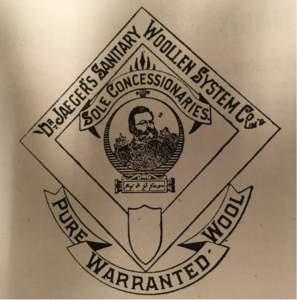 UK trade mark at issue in the criminal prosecution of the Jaeger Clothing Company under the Merchandise Marks Acts brought by the Board of Trade in 1896, discussed by Dr Cooper in her talk to the BCHS

I recently contributed to the panel ‘Crime, Enterprise and the Law’ forming part of the British Crime Historians Symposium, alongside the historian Dr David Churchill (University of Leeds) and the criminologist Prof. Michael Levi (Cardiff University). My presentation related to aspects of my research project funded by the Leverhulme Trust mentored by Prof. Lindsay Farmer. My research questions the historical assumption made by lawyers today that intellectual property has always been primarily a domain for the civil and not the criminal law. In my presentation to the BCHS, I discussed the Merchandise Marks Acts passed in the second half of the nineteenth century: the first UK statutes concerning trade marks generally (rather than trade marks for specific trades) and which were criminal law measures. Drawing on original archival work, I discussed the relationship between civil and criminal law both in the making of the Merchandise Marks Act 1862 (partly published in my chapter for ‘Landmark Cases in Intellectual Property Law’, ed. J. Bellido, Hart Press, 2017), as well as the application of the Merchandise Marks Acts in a high profile Board of Trade prosecution brought against the Jaeger clothing company in the late nineteenth century (applying the criminal law to Jaeger’s own branding strategy).

The intersection between criminal law and intellectual property also featured in the panel discussion instigated by Dr David Churchill’s presentation of aspects of his AHRC funded research about the historical emergence of the security industry (locks, safes and strong-rooms). As well as constituting important records to chart the development of security technology, patents and trade marks were important tools of business strategy. Dr Churchill explained that, in the mid to late nineteenth century, the term ‘patent’ was synonymous with a security device being of good quality and the resulting panel discussion explored the potential for a gap between marketing discourse and the standards actually demanded by patent law at the time (as regards both grant and infringement). Also, just as in recent decades, the introduction of technical protection measures for ‘locking up’ copyright works has led to new layers of legal regulation in copyright measures (e.g. Art. 11 WIPO Copyright Treaty 1996), the discussion raised questions of whether improved security locks for physical property in the nineteenth century resulted in new legal regulation concerning tampering with locks or other security devices. We also referred to the research on patent history by Dr Sean Bottomley, particularly his prize-winning monograph: The British Patent System during the Industrial Revolution 1700-1852 (CUP, 2014).  More information about the Symposium, including the full programme, can be found here:  https://eu.eventscloud.com/website/5066/programme/

Dr Elena Cooper will be discussing the Jaeger prosecution and its implications for the nineteenth century history of trade marks and criminalisation in a further talk to be hosted by CREATe, currently planned to take place on-line later in the autumn term, with guest discussant Dr Jennifer Davis (University of Cambridge) and CREATe’s Dr Luis Porangaba as chair. Further information will follow on the CREATe blog, but those interested can email Dr Cooper in advance for more details: elena.cooper@glasgow.ac.uk.

Subscribe to CREATe newsletter to keep updated on our research, projects, events, and related activities.