The UK Government has responded to the Department for Digital, Culture, Media and Sport (DCMS) Inquiry into ‘The Economics of Music Streaming’. The Inquiry launched in 2020 to, ‘examine what economic impact music streaming is having on artists, record labels and the sustainability of the wider music industry’ received submissions of written and oral evidence from interested parties from many fields, including a submission from CREATe. 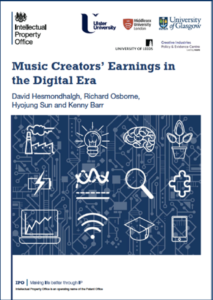 The wide-ranging DCMS report made recommendations relating to a number of contested issues including: creator remuneration, copyright reversion, contract revision, information asymmetry and market power of large operators in the UK music copyright industries. The Government’s response is similarly expansive, but perhaps the principal conclusion it draws is that, ‘more targeted research and evidence is needed before the Government can decide what action it should take on some of the issues highlighted by the Committee’. It is stated that this will be achieved by establishing industry contact/working groups to convene on issues including: equitable remuneration, platform liability, contract transparency and codes of practice for the music sector. These are areas where CREATe researchers have been active in researching including: performers’ rights and equitable remuneration, rights reversion, platform regulation and the influence of dominant market operators.

Running concurrent to, but independently of, the DCMS Inquiry, Dr Hyojung Sun (Ulster University), Professor David Hesmondhalgh (University of Leeds) and Dr Richard Osborne (Middlesex University) were commissioned by the Intellectual Property Office (IPO) to conduct research into Music Creators’ Earnings in the Digital Era. CREATe researcher Dr Kenny Barr assisted on this project from January to June 2021. This research fed into a report published by the IPO on Thursday 23rd September.

Published alongside the report on music streaming, Kenny Barr was lead-researcher and lead-author of a separate but closely related IPO-commissioned study of Buyout Contracts in the UK Audio-visual Commission Sector. This work, examining the ownership and control of intellectual property subsisting in screen content, complements research currently being undertaken at CREATe as part of AHRC Creative Industries Policy and Evidence Centre (PEC) examining ‘terms of trade’ in the UK television production sector. This work informed the CREATe submission of evidence to another DCMS Committee inquiry examining The Future of Public Service Broadcasting.