CREATe is happy to present the eighth entry in our series of working papers released in 2021: “The EU press publishers’ right: where do Member States stand?”. This working paper by Ula Furgał, a postdoctoral researcher at CREATe, is a pre-print version of an article forthcoming in the Journal of Intellectual Property Law and Practice.

The EU press publishers’ right made the headlines last week, as the French Competition Authority delivered its decision in the ongoing case between Google and press publishers concerning payments due to the new related right (case previously reported on here). Whereas the Authority’s final word on Google possibly abusing its dominant position is yet to come, the latest decision finds that the tech giant has not been negotiating with French press publishers in good faith, and imposes sizable fines. What is, however, most interesting is the Authority’s objection to binding negotiations on payments due to the press publishers’ right to Google News Showcase, a new product providing curated news content, launched by Google in late 2020. Most (if not all) of the deals being struck now globally focus exactly on this new product. 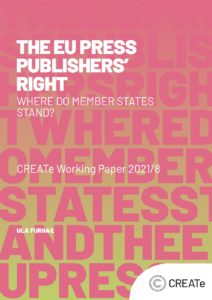 First, while implementing the press publishers’ right, Member States tend to err on the side of caution. They leave such important issues as the interpretation of “very short extracts” which are excluded from the new right’s scope, and the “appropriate share” of revenues due to authors, to stakeholder agreements and future court decisions. In extreme cases, they simply copy-paste the wording of art. 15 CDSM.

Secondly, the press publishers’ right provides a legal basis for negotiations between press publishers and platforms. It does not, however, regulate how those deals are to be made. The path taken in France, of using competition law as an enforcement tool, has been subject to considerable criticism, and its transferability to other jurisdictions is questionable. Learning from the French implementation, some Member States take the collective management route, to strengthen the publishers’ position. Most notably, Denmark has adopted an extended collective management model, with 30 Danish media organisations recently forming a collective bargaining organisation. The collective management route is not, however, novel, as it has previously been used and failed in Germany.

Thirdly, the press publishers’ right applies only to the platforms, or to be more accurate, information society service providers, which make press publications available. Thus, it gives publishers a legal basis for negotiations with news aggregators and search engines (aka Google), but not social media platforms, such as Facebook. As it stands now, especially after the recent judgement of the recent judgement of the CJEU in the YouTube case, the EU copyright law does not support the position that user-uploaded content is made available by social media. It is users uploading content on the platform make it available to the public, and the individual users’ actions are not covered by the press publishers’ right. The fact that Facebook has been signing deals with publishers should not be overinterpreted, as those deals focus on a News Tab, a dedicated news space providing users with curated content, and not user-uploaded content. The press publishers’ right is not capable of supporting press publishers’ endeavours to secure payments from both Google and Facebook.

The press publishers’ right provided in art. 15 of the Directive on Copyright in the Digital Single Market is the European Union’s response to the news media vs digital platforms clash. The right was adopted following a heated and highly polarised debate, and should become a part of Member States’ laws by 7 June 2021. Even though the deadline is less than two months away, the majority of the Member States still have a long way to go before the press publishers’ right becomes national law. This article offers an opinion on the current state of the implementation of the right. It outlines the ongoing policy discussions and decisions taken by the Member States with regard to selected aspects of the press publishers’ right, including its scope, an appropriate share of revenues due to authors, and licensing mechanisms. The article argues that the implementation of the press publishers’ right is unlikely to bring the news media vs digital platforms saga to an end, as not all uncertainties concerning the new right’s scope will be tackled, and the calls for further regulatory interventions are likely to follow.