By Bartolomeo Meletti21 July 2021No Comments

ReCreating Europe has published a report outlining the most pressing copyright-related issues and concerns faced by documentary filmmakers and by curators and creators of immersive experiences in the United Kingdom and the Netherlands. This is the first main output of the project Developing best practice codes for creative audiovisual re-use, led by CREATe in collaboration with IViR (University of Amsterdam). Inspired by the Codes of Best Practices in Fair Use initiative by Professors Patricia Aufderheide, Peter Jaszi and others in the US, the ultimate goal of the project is to enable creative and cultural audiovisual sectors to make informed decisions on the reuse of copyright materials based on shared principles and best practices.

The report – which I co-authored with Dr Stef van Gompel (IViR) – systematises the findings of four online workshops conducted in 2021, one for each community in the UK and the Netherlands. Potential participants were identified through desk research; the researchers’ networks of contacts; and existing community networks such as the Scottish Documentary Institute and the UK Feature Docs (UKFD) network. The communities under consideration were defined through participants’ self-identification. At the beginning of each workshop, participants were asked to introduce themselves, describe their creative or curatorial practice, and share one copyright issue they found particularly worrying. Following the round of introductions, the group had to deliberate on the three most pressing copyright concerns faced by the sector. 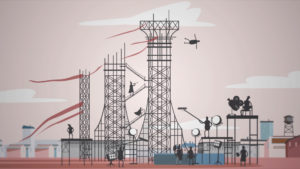 Illustration by Ilaria Urbinati for The Forger’s Apprentice, Episode 3 of The Game is On! series.

The four workshops have generated an interesting picture of common issues and concerns. Largely, documentary filmmakers and creators and curators of immersive experiences face similar challenges related to copyright and the lawful reuse of audiovisual works. Whether with permission from the rights holders or under copyright exceptions, the lawful reuse of protected materials is problematic for both communities in both jurisdictions. Most issues discussed by participants could be grouped under three categories:

In most cases, participants explained, rights clearance is prohibitively time-consuming and expensive: rights holders are difficult to identify and trace, and licensing fees are usually too high and inflexible. This often prevents immersive experiences from being created or released, or affects the quality of documentary films. Rights clearance is not a viable option for curators and creators of immersive experiences who need to access and use large collections of protected works for technical (e.g. AI) or creative reasons (e.g. experimenting with various materials before deciding what to include in the final product). Documentary filmmakers perceive the reuse of copyright works as a ‘wild west’ characterised by legal complexity and ambiguity, and risk-averse, conservative funders, broadcasters and distributors requiring rights clearance of any third-party material included in the films they fund and distribute. They find it unfair having to pay high commercial licensing fees to use clips in films that have cultural rather than commercial value, especially when it is unclear whether the person or organisation requesting the payment is entitled to do so.

Most participants do not rely on copyright exceptions due limited awareness and understanding of permitted uses, uncertainty around their interpretation and applicability, and lack of resources and support. The few participants who rely on exceptions to use protected materials do so with legal support, either internal (e.g. legal expert within a cultural heritage organisation) or external (e.g. by a lawyer in the form of an opinion letter underpinning an Errors and Omissions insurance). Among these, one participant shared interesting insights into how fair dealing operates in practice in the UK documentary filmmaking sector.

Both communities in the UK and the Netherlands expressed concerns in relation to the territoriality of the law and how it limits their ability to distribute their work on a global basis. Creators and curators of immersive experiences usually exploit their work for a limited period of time (e.g. in gallery exhibitions or touring shows), but are concerned about legacy responsibilities as their work is often made available online. Even when they create culturally valuable films that generate little profit, documentary filmmakers do not want to lose commercial viability in the long term. They are interested in better understanding the difference between commercial and non-commercial use, and how that affects their ability to rely on exceptions, but do not want to be constrained by the distinction either. On 24 March 2021, following her CREATe Public Lecture ‘An Empirical Perspective on Drafting Copyright Exceptions’, I asked Dr Emily Hudson to clarify the difference between commercial and non-commercial use on behalf of the group of documentary filmmakers. Emily explained that the non-commercial restriction embedded in some exceptions refers to the dealing itself, not to the status of the organisation: some for-profit entities can undertake non-commercial acts and vice-versa. The recording of Emily’s lecture including her more detailed response to my comments can be found in this Public Lecture report by Aline Iramina.

The publication of the ReCreating Europe issue reports concludes the first stage of the project. The next steps will be to engage in formal deliberation exercises using social science standards to identify shared principles and acceptable norms within these communities; and to draft sector-specific codes of best practices that reflect such principles and norms.

One of the points discussed by UK documentary filmmakers which we would like them to expand on at the upcoming deliberative workshops relates to commenting in film. One participant, following legal advice on exceptions, had to add text on screen to explicitly explain the points they were trying to make by using certain clips. Another participant shared a similar experience and stressed how having to “verbally or textually justify and articulate on screen the commenting that you’re doing” impinges filmmakers’ creative practice and goes against modern documentary filmmaking concept of commenting by “juxtaposing image with image”. This exchange seems to suggest that – as with ‘quotation’ – we need to go beyond the textual paradigm to properly understand the meaning of ‘criticism or review’ in different cultural contexts, and so the scope of application of the corresponding exception.

Participants also identified and discussed two of the main challenges that we will encounter in the next steps of the project. One is the danger that by standardising and encouraging certain practices, the codes may signal that other practices are questionable or unlawful. Another is that since both creative practice and copyright law change over time, it will be challenging to draft future-proof codes of best practices. On 11 June 2021, Stef and I had the opportunity to discuss these and other challenges with Professor Peter Jaszi at the webinar ‘Building Copyright Literacy for a Global Community of Open Educators with the Code of Best Practice in Fair Use for OER’. The webinar was part of the series ‘Copyright and Online Learning during the COVID-19 Pandemic‘, organised by Chris Morrison and Jane Secker and hosted by the Association of Learning Technology (ALT). Peter explained that the codes should not establish metrics on permitted uses such as 30% of a work, three bars, or a thousand pixels. Rather, the codes describe a “thought process that practitioners can use to get from a presentation of a question about whether an appropriate exception applies to a conclusion easily, quickly, and with robust results”. The webinar’s recording can be found below, and the discussion between the ReCreating Europe team and Peter Jaszi is at 01:06:30.

Video of the Webinar:

The deliberation exercises will be designed to respond to these as well as other theoretical challenges identified by scholars, with a view to drafting codes of best practices that are sufficiently ‘certain, representative and aspirational’ (Rothman, 2007). As explained in the ReCreating Europe report, we will be able to rely on the support of the Screen Heritage Working Group set up by the UK Feature Docs (UKFD) initiative. Following our recommendation, the UKFD policy report Making It Real: A Policy Programme for UK Independent Documentary Film proposes to ‘Develop a code of practice for fair use’ as part of a new policy programme for the UK documentary film industry.

A full description of the issues summarised above and a preliminary analysis of how they relate to the national legal frameworks in the UK and the Netherlands can be found in the ReCreating Europe report.