21 for 2021: User Creativity in Online Platforms – Copyright or Contract?

21 for 2021: User Creativity in Online Platforms – Copyright or Contract?

This post is part of a series of evidence summaries for the 21 for 2021 project, a CREATe project within the AHRC Creative Industries Policy and Evidence Centre (PEC). The 21 for 2021 project offers a synthesis of empirical evidence catalogued on the Copyright Evidence Portal, answering 21 topical copyright questions for the 21st century. In this post, Amy Thomas (RTA, PhD Candidate, University of Glasgow) identifies empirical research surrounding the relationship between copyright and T&Cs, revealing a complex area where law, contract and technology work (often at odds with each other) to regulate user creativity.

Nearly every user of an online platform, particularly of social media, will be a content creator, and this continues to form a major part of life online. From a quick glance at the word cloud below, we see that the ‘user’ is now more closely associated with creativity, labour and professionalism. Pure consumption is foregrounded by comparison. 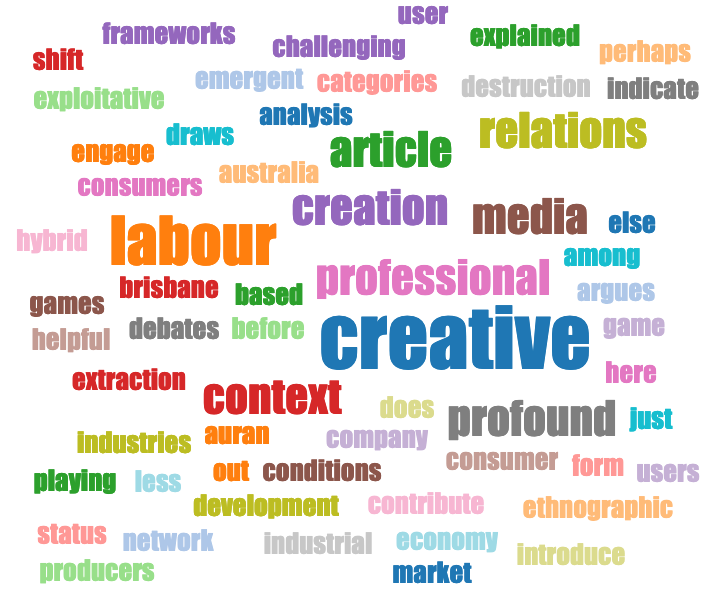 By extension, commercial platforms are now reliant on the creation and dissemination of user-generated content (UGC). But how is this content regulated? What happens when content is uploaded – who owns this creativity, and what can be done with it? While much of the discussion is focused on copyright as a tool of regulating creativity, the law of copyright may be diminished alongside contractual regulation through terms and conditions, terms of use, or terms of service (collectively here ‘T&Cs’).

Unlike goods that are otherwise clearly subject to copyright, but whose T&Cs straddle the line between compatibility and incompatibility (e.g. digital music – see Gasser (2004), Grøndal (2006) and Kretschmer et al (2010)), copyright in online platforms is often an invisible layer of content sharing. In this context, user creativity can simply be a form of “play” (Poor, 2012), but it may also be a desirable asset that’s not restricted to its commercial viability – users can be “experimental, expressive and politically controversial” (Lastowka, 2011). For this type of creativity, platforms are both an enabler and gatekeeper.

This topic has attracted attention from legal scholars as well as regular users of online platforms. In 2019 a viral Instagram post purported to act as a type of warding charm in response to alleged upcoming changes to the T&Cs of several online platforms. With it, users forbade the platform from doing anything with their content: “With this statement, I give notice to [Instagram] it is strictly forbidden to disclose, copy, distribute, or take any other action against me based on this profile and/or its contents”. Whilst ultimately a hoax with no legal effect, the pervasiveness and reoccurrence of these digital urban myths is suggestive of how little users know about the rules governing their online creativity, or the belief that this regulation is a two-way dialogue.

Yet, the core idea behind this myth contains some truth: platforms indeed benefit from a generous, automatic licence grant from the user when they engage in their services (Van Alsenoy et al (2015)). The perceived overreach of this grant has fuelled the current debate over the necessity of copyright ‘user rights’ (Kretschmer et al (2010), Flynn and Palmedo (2017)), and in particular the question of whether copyright exceptions should be subject to contractual overridability. But does the research evidence base support this concern?

Whilst the Evidence Wiki does not have a specific industry category for online spaces or social media, the text search function allows for tailored searches of specific terms. Keyword searches for this blog include variants of ‘T&Cs’ and social media sites by name (e.g. Facebook, Twitter). [N.B. Whilst this blog is concerned with social media, an earlier body of research on T&Cs of virtual worlds parallels many issues explored here – see: Jankowich (2006), Roquilly (2011), Lastowka (2011), Lastowka (2013).]

The results from this search show one prominent object of interest: whether or not average users read T&Cs and whether that matters. Fiesler, Lampe and Bruckman (2016) suggest the answer is a strong ‘yes’. In a survey of over 400 participants across 30 different websites, the study finds that there is a large gap between a user’s expectation of what is included in T&C’s, and the reality of what they contain. For social media sites, less than half of the participants expected to see a clause permitting platforms to transfer or sublicence their content to third parties; similar figures are evident for licences that are granted irrevocably.

The misalignment between expectations and reality is exacerbated by a relatively low degree of understanding when it comes to what certain terms actually mean in practice. What, for example, is the user to make of the following clause from YouTube’s T&Cs?:

“By providing Content to the Service, you grant to YouTube a worldwide, non-exclusive, royalty-free, transferable, sublicensable licence to use that Content (including to reproduce, distribute, modify, display and perform it) for the purpose of operating, promoting, and improving the Service.”

Does YouTube have to pay users for content? No. Does this mean content could be sold to a third-party advertiser? Maybe. What can happen to content when used for “the purpose of operating, promoting, and improving the Service”? Unknown – this is never defined. According to Fiesler (2018), this dense legalese makes T&Cs less intuitive, less likely to be understood with any accuracy, and more likely to perpetuate misunderstandings of what can happen to a user’s content. Combined with potentially misleading fair use policies, many users take the approach of ‘better safe than sorry’ when it comes to creating and uploading content, which has the potential to chill user creativity (Humphreys (2008), Fiesler, Feuston and Bruckman (2015)).

Tan’s (2014) study points to a more optimistic legal analysis of the T&Cs for Facebook, YouTube, Twitter and Wikipedia. They submit that the broad, unencumbered licence grants between users and platforms is most likely precautionary in nature, as most content on these sites will not reach the threshold of originality to convey any ownership rights in the first instance (a perhaps debatable conclusion, particularly in e.g. the UK context). Later work by Tan (2015) instead points to technological features of social media sites as the more worrying aspect of user regulation. They find that platforms have the effect of encouraging, or ‘nudging’ the user to create, modify and disseminate creative works (e.g. through the use of an automatic, embedded share button), perpetuating the idea that their activities will always be copyright compliant. This generous indulgence of copying taken to its literal conclusion could condone potentially exploitative, borderline cases, such as that of Richard Prince in his re-appropriation of Instagram selfies. Simultaneously, the threat of copyright infringement is omnipresent, and as the user does not benefit from the same ‘safe harbour’ status that benefits the platform, they in fact operate in a high-risk environment.

The findings of these earlier studies have been confirmed more recently in a new context: emergency remote teaching during the COVID-19 pandemic. Pascault et al (2020) recontextualise the user, not as a faceless mass, but as teachers and students in the pursuit of education. Problematic copyright terms in regards ownership of materials, liability for infringement, and takedown practices, all have new implications as online platforms are repurposed for education.

Surmising, the studies surveyed here confirm that the combination of legal, technical and contractual features, which in principle are aimed at enabling user creativity, have the counterintuitive effect of putting the user in a confusing, and potentially vulnerable, position.

User creativity is regulated in online spaces through a complex tapestry of copyright, T&Cs and technological interventions. The picture is often confusing, but many of the studies surveyed here converge on the theme of imbalance; T&Cs are not a two-way dialogue, but instead, in effect, act as legal mandates to change the law without the legislative process. The evidence reveals a fundamental tension between the open, collaborative spaces that necessarily invite user interaction and creativity, versus the desire for commercial control and competition that have come to characterise big tech (Humphreys (2008), Humphreys et al. (2008)).

Yet, on the face of it, T&Cs (and other contractual arrangements) offer tailoring opportunities that copyright legislation cannot, and in this regard can be more flexible to technological changes than a fixed, legal solution. However, context is king. Many of the problems illustrated in the literature – the ‘take it or leave it’ system, the sweeping and broad terms disproportionately in favour of the platform – are symptoms of the bigger problem at the heart of the platform society. Namely, unrestricted scale and missing accountability. Tan (2014) specifically cautions that the capacity for contractual overridability of copyright contributes to the “extreme concentration of power in [only] a few companies”. However, whilst the existence of these worrying terms is well-established by the evidence, to what degree these are actually relied upon or enforced is unclear. How to measure this, and how it may contribute to the dominance of a small number of platforms, may be a question for future research. In a similar vein, a valuation of UGC would be a worthwhile endeavour (similar to the Heald, Erickson and Kretschmer (2015) study on the valuation of public domain photographs).

Platforms have become gatekeepers for cultural content, and as such many of the studies reviewed here opine that T&Cs shouldn’t substitute copyright legislation; stronger, clearer and mandatory ‘user rights’, free from contractual overridability, are frequently cited as a possible solution to this imbalance. And whilst it’s true that copyright primarily serves to benefit the author (but who’s to say that users cannot be authors too?), it’s clear that the introduction of two key new legal actors – platforms and users – has disturbed this balance sufficiently to require re-evaluation. To this end, future, qualitative research may look to understand more concretely who these actors are (much like the detailed ethnographic studies frequently employed in science and technology studies), or how they have been constructed in the policy-making process (similarly to e.g. Erickson (2014)).