CREATe contributes to ‘Theatre, Art and Visual Culture in The Nineteenth Century’ panel at Association for Art History Conference 2021

CREATe contributes to ‘Theatre, Art and Visual Culture in The Nineteenth Century’ panel at Association for Art History Conference 2021

By Elena Cooper26 May 2021No Comments 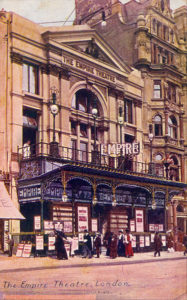 The panel, which relates to the AHRC funded project Theatre and Visual Culture in the Long Nineteenth Century sought to interrogate the connections between theatre and visual art in the nineteenth century. Drawing on  Martin Meisel’s  Realizations: Narrative, Pictorial and Theatrical Arts in Nineteenth-Century England (1983, Princeton University Press), humanities scholars consider the nineteenth century to be a time of blurred boundaries between visual art and theatre: visual art and theatre were closely interconnected, in the sense of the pictorial nature of theatre and the dramatic nature of art. Elena Cooper presented on the legal position that facilitated these developments. Dr Cooper’s presentation drew on her monograph Art and Modern Copyright: The Contested Image (CUP 2018), as well as new research carried out at The National Archives into the Living Pictures cases: Hanfstaengl v. Baines (1895) and Hanfstaengl v Empire Palace (1894) which concerned whether copyright in paintings was infringed by the representation of the paintings by posed actors on stage as part of a performance at the Empire Theatre on Leicester Square, and the subsequent reproduction in the illustrated press of sketches of that posed scene drawn by journalists who attended the performance. Dr Cooper argued that, paradoxically, the interconnections between art and drama could flourish in the nineteenth century, because copyright law perceived art and drama to be fundamentally different in nature.

An overview of the papers and resulting discussion, together with videos of the full presentations, can be found on the Theatre and Visual Culture in the Long Nineteenth Century project’s website: https://theatreandvisualculture19.wordpress.com/2021/05/07/new-connections-our-association-for-art-history-session-theatre-art-and-visual-culture-in-the-nineteenth-century/amp/