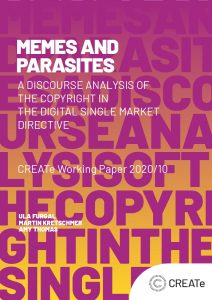 CREATe presents the tenth entry into our series of working papers released in 2020: “Memes and Parasites: A discourse analysis of the Copyright in the Digital Single Market Directive” by Dr Ula Furgal, Prof. Martin Kretschmer and Amy Thomas.

As we pass the fourth anniversary of the proposal for the Copyright in the Digital Single Market (CDSM) Directive, this working paper looks to the past to reflect on the discourses that led us to its adoption.

Throughout the formation of the Directive we all found ourselves embroiled in the discussions surrounding its development: Dr Furgal’s doctoral research focused on the press publishers’ right, whilst CREATe’s Copyright Reform resource page collected and continues to offer a trove of data to consult and find meaning in. In particular, we were curious as to how the Directive evolved from its original aim of harmonising copyright with a view of creating a digital single market, to determining the ‘life and death’ of media or challenging the dominance of the US ‘parasite’ platforms (summarised in a presentation by Prof. Kretschmer at re:publica, recording available here). What changed this narrative and how can we evidence these changes?

Focusing on the Directive’s two most contentious provisions: Articles 11 (press publishers’ right) and 13 (intermediary liability), our research offers an explanation of these changes. We conduct a discourse analysis of three sets of primary sources: transcriptions of the EP plenary debates, stakeholders’ submissions and press releases of the EU institutions, which leads us to uncover four topoi that dominate the debate: (a) Technocratic; (b) Value gap; (c) Internet freedoms; (d) European identity.  Each topos has temporal elements that evolve into sophisticated discourse strategies, and can be linked to the changes in Articles 11 and 13 (now Articles 15 and 17).

In that respect, the narrative of our paper has changed over time. With the paper originally entitled ‘Disharmonisation and the failure of a European public sphere’ we have begun to see a more meaningful, but elusive relationship between the discourse and the law-making process. Some changes have real substance. Others arguably fail to address the core issues they purport to solve. In some respects, seemingly radical changes were left to the interpretation of member states during the implementation process, which will ultimately uncover their significance.

The working paper is an edited transcript of a presentation we gave three times in the summer/autumn of 2020: at a seminar on content and discourse analysis at the Weizenbaum Institute Berlin on 26 June 2020 (at the invitation of Prof. Axel Metzger and Dr Simon Schrör); at the Gikii conference on 31 July 2020 (presented by Ula Furgal and Amy Thomas); and at the Centre for Internet Law and Policy, Strathclyde University, Glasgow on 2 October 2020. The transcript is taken from the last presentation given as a Zoom seminar. A YouTube stream is available here. We would like to thank our colleagues Dr Oles Andriychuk and Dr Angela Daly for inviting and hosting us.

The Directive on Copyright in the Digital Single Market has been a subject of heated and highly polarised debate, and an object of intense lobbying from the outset. It grasped the attention of a multitude of stakeholders, including tech companies, publishers, platforms, creators and SMEs, and urged thousands of people to go out on the streets in a sign of protest against what they believed was the “end of the internet as we know it”. The debate was often emotional, and involved such terms as “meme ban”, “censorship”, “upload filters”, “link tax”, or a puzzling “value gap”. However, amongst those emotive catchphrases lies a foundational discussion on the purposes of copyright law, and how its relationship with artists, technology, media, news, culture and citizenship unfolded.

In this presentation, we investigate how discourse developed during the negotiation phase of the Directive, focusing on the most controversial provisions: draft Articles 11 (press publishers’ right) and 13 (platform liability). Focusing on the period between publication of the proposal by the Commission in September 2016, and the adoption of the Directive by Parliament and Council in March/April 2019, we juxtapose these changes with an analysis of (1) parliamentary debates, (2) press releases by the Commission, Parliament and Council, and (3) 80 stakeholder submissions that sought to shape the evolving legislation.

Through discourse analysis, we uncover four topoi that appear to dominate the debate: (a) Technocratic (responding to tech development by updating the copyright framework), (b) Value gap (the redistribution of revenues to benefit creators and producers), (c) Internet freedoms (freedom of expression and user interests), and (d) European (the promotion and protection of European culture and identity).

Finally, we show that changes in the Directive’s text can be associated with the appearance and evolution of the discourse.

We show that changes in the draft legislation can be associated with the appearance and evolution of the four topoi in the debates, but that changes in the proposed legal language tend to be obfuscatory, rather than addressing the issues. Controversial language such as “content identification” (associated with filtering) was removed and safeguards were offered, but many of these changes remained meaningless (in law) or open to different implementations.