CREATe member appointed to editorial board of US journal

CREATe member appointed to editorial board of US journal 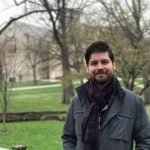 Dr Luis H Porangaba has been recently appointed as an editor and member of the editorial board of the Trademark Reporter.

The Trademark Reporter is a peer-reviewed, scholarly journal based in the United States which has been published since 1911. It comprises an international audience of academics, practitioners and judges, and is often cited by courts such as the US Supreme Court in Iancu v Brunetti (2019) and Matal v Tam (2017).

Luis, who previously held a lectureship position at Oxford, joined Glasgow Law School and CREATe as the new Lecturer in Intellectual Property Law in September 2019. He is particularly interested in the study of the doctrinal mechanisms that courts have devised in response to the expansion of protectable subject matter across IP domains in the recent past. Luis’ doctoral research, which explores the interplay between the functions theory and scope of protection in European trade mark law, is under contract to be published as a monograph by Cambridge University Press. His recent scholarship has appeared in the Intellectual Property Quarterly (‘A contextual account of the trade mark functions theory’: available here) and in the Trademark Reporter (‘Acquired distinctiveness in the European Union: when non-traditional marks meet a (fragmented) single market’: available here).