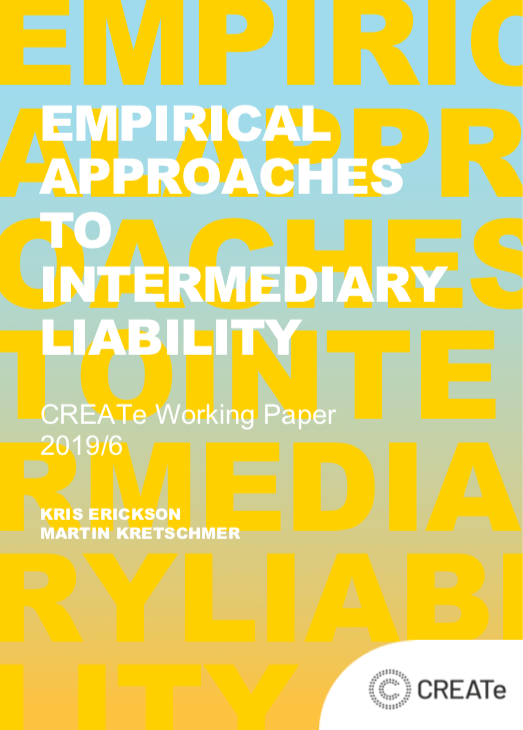 entry in our series of working papers released in 2019: “Empirical Approaches to Intermediary Liability” by Kris Erickson (Associate Professor in Media and Communication, University of Leeds) and Martin Kretschmer (Professor of Intellectual Property Law and Director of CREATe Centre, University of Glasgow).

This paper considers what empirical evidence may contribute to the debates around online intermediary liability. What do we need to know in order to frame the liability of intermediaries and what does the relationship between theory and empirics imply for the wider issue of platform regulation? We evaluate the performance of so-called intermediary liability safe harbours, which have been operating for two decades in multiple jurisdictions.

Drawing from the Copyright Evidence Wiki, CREATe’s open-access repository of findings related to copyright’s effects, we systematically review the body of empirical studies relating to notice-and-takedown systems during the 20-year period from 1998 to 2018. We identify five key sub-fields of empirical inquiry pursued so far: the volume of takedown requests, the accuracy of notices, the potential for over-enforcement or abuse, transparency of the takedown process, and the costs of enforcement borne by different parties.

The evidence indicates that rightholders have made effective use of the notice-and-takedown system to enforce their copyrights, dramatically accelerating with the use of automated systems since about 2012. The potential for abuse, while real, it likely over-stated. The distribution of cost burdens creates incentives for rightholders to pursue instances of straight piracy, while user-generated re-use remains largely tolerated. Areas for improvement, particularly in relation to due process and transparency, are identified.

The paper was first presented at EPIP 2019 in Zürich, the annual conference of the European Policy for Intellectual Property Association. It will be published later in the year as a chapter in THE OXFORD HANDBOOK OF INTERMEDIARY LIABILITY ONLINE (ed. Giancarlo Frosio), Oxford University Press.

This release is part of CREATe’s research within the AHRC Creative Industries Policy & Evidence Centre (PEC). Further information about the PEC work stream on Intellectual Property, Business Models, Access to Finance and Content Regulation can be found here.

The editorial board of the Copyright Evidence Wiki takes place on Wednesday, October 9th, within the CREATe Symposium 2019.