Post by the authors of The Game is On! – Prof. Ronan Deazley (Queen’s University Belfast) and Bartolomeo Meletti (CREATe, University of Glasgow)

The UK Intellectual Property Office, on their educational portal Cracking Ideas, has published a new teaching resource based on The Game is On! The new resource represents the latest stage of a genuine, long-standing collaboration between university, industry and government. 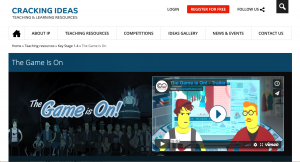 The Game is On! on crackingideas.com

It was the 11 April 2014, on a train from Bournemouth to London, when the idea for The Game is On! first began to take shape. We had just attended a Public Domain Calculators workshop at Bournemouth University, organised by CIPPM as part of their annual symposium, and were travelling to London to attend the launch of the CREATe study on Unlawful File Sharing at the Stationers’ Hall. The train trip itself became a copyright event: we dubbed it ‘The Public Domain Train’. Not only did the train journey fall hard on the heels of a workshop on the public domain in Bournemouth, it also provided us with the opportunity to storyboard Copyright Bites, a series of short animated videos that explore the relationship between copyright and the public domain. The Copyright Bites were part of a suite of materials we were producing following the official launch of CopyrightUser.org at the AHRC Creative Economy Showcase event on 12 March 2014, where we also distributed the Copyright Myth-Reality Cards for the first time. In developing Copyright Bites we uncovered a shared passion for the Sherlock Holmes canon, and in doing so stumbled upon our first iteration of the great detective – Sherlock Holmes, resplendent in pink, designed by Davide Bonazzi. We had just joined an ever-growing community, formed by the countless creators who have produced new editions, adaptations and imitations of Holmes. 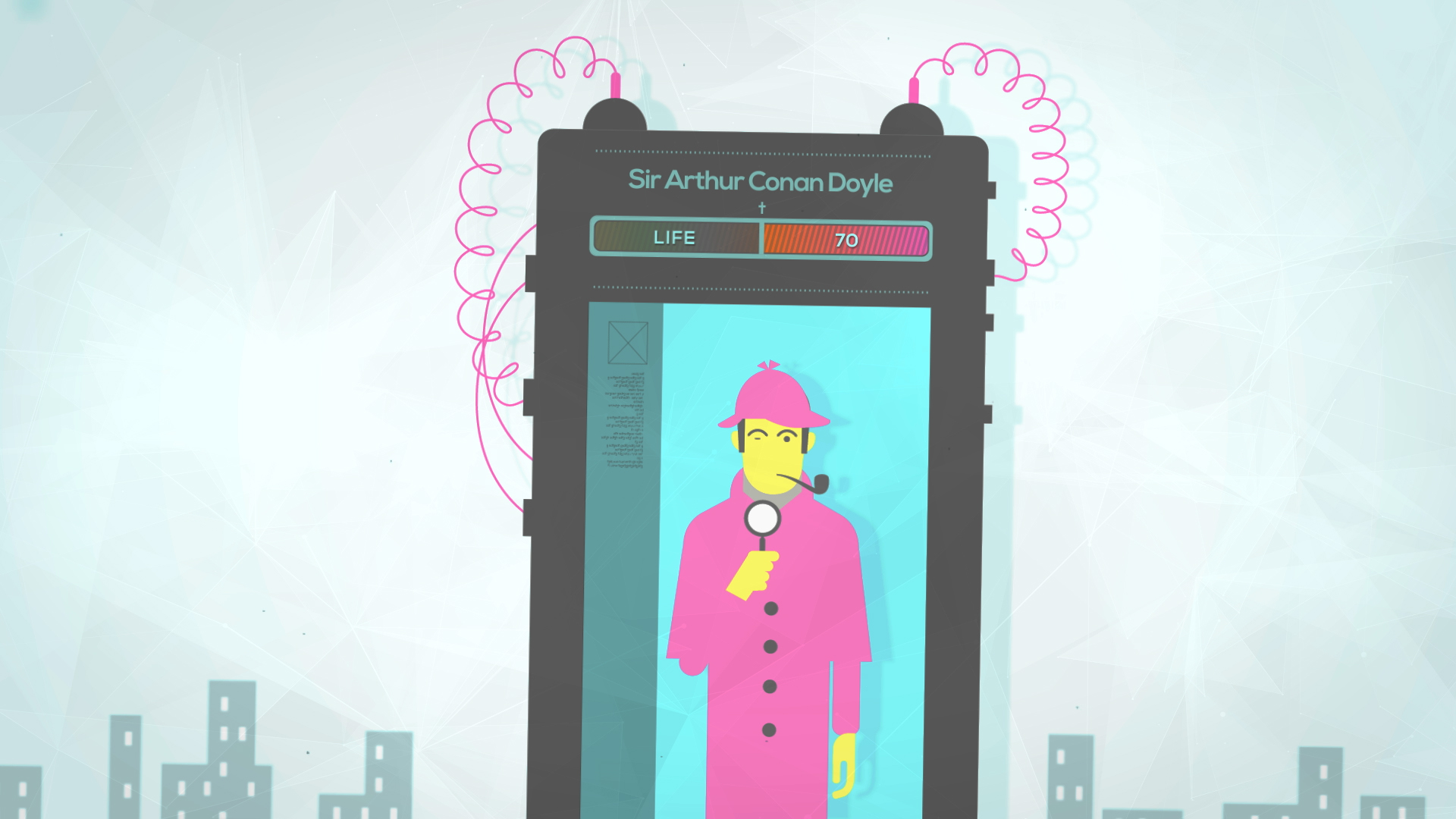 In addition to Sherlock Holmes, on The Public Domain Train we discovered another shared passion: the use of lawful appropriation as a creative technique. A few weeks later (31 May-1 June), we found ourselves in Glasgow brainstorming an original story for a new animated film – one that was initially inspired by our favourite detective as well as another work that marked our childhoods: Carlo Collodi’s Pinocchio. Our starting point was the image of Pinocchio hanging from a tree, a scene from Collodi’s original story. There is something interesting in how subversive, violent and sexual elements of traditional European stories tend to disappear in their Hollywood adaptations (e.g. Disney’s Pinocchio). Everything flowed from there. 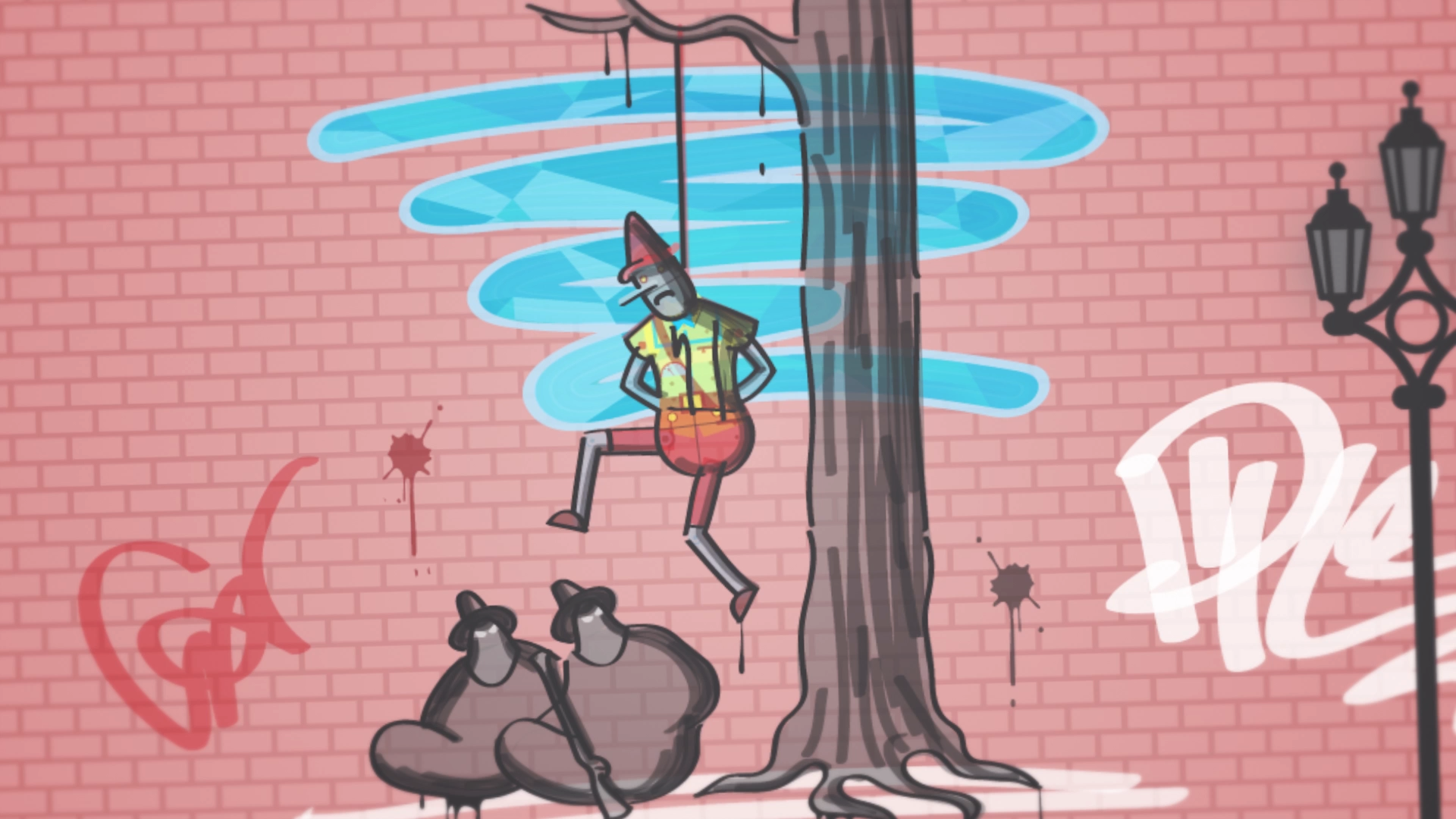 Indeed, death and resurrection are experiences shared by both Pinocchio and Holmes. Pinocchio getting hanged by the Fox and the Cat in chapter 15 was the original finale of Collodi’s Pinocchio, The Story of a Marionette (the original title of the series), before Collodi was persuaded to extend his tale. Similarly, having become tired of his famous creation, Conan Doyle decided to kill off Sherlock in 1893: in The Final Problem Sherlock plunged to his death at the Reichenbach Falls in a deadly tussle with his arch-nemesis Professor Moriarty. For similar reasons – public demand and publishers’ pressure – both Collodi and Doyle agreed to revive their creations. Holmes returned from the dead in The Adventure of the Empty House (first published in October 1903), whereas Pinocchio was revived by the Blue Fairy, introduced by Collodi in chapter 16 to continue the story with a new title: The Adventures of Pinocchio (1882-83). (And, of course, our own Blue Fairy features prominently in The Game is On!)

These are the kind of stories and curiosities that inspired the production of The Adventure of the Girl with the Light Blue Hair, initially conceived as a standalone, open-ended short film. Initially, we decided to leave the adventure open-ended, as part of our commitment to the lawful reuse and appropriation of copyright works. That is, we envisaged follow-on creators taking our work, and extending it in their own fashion. 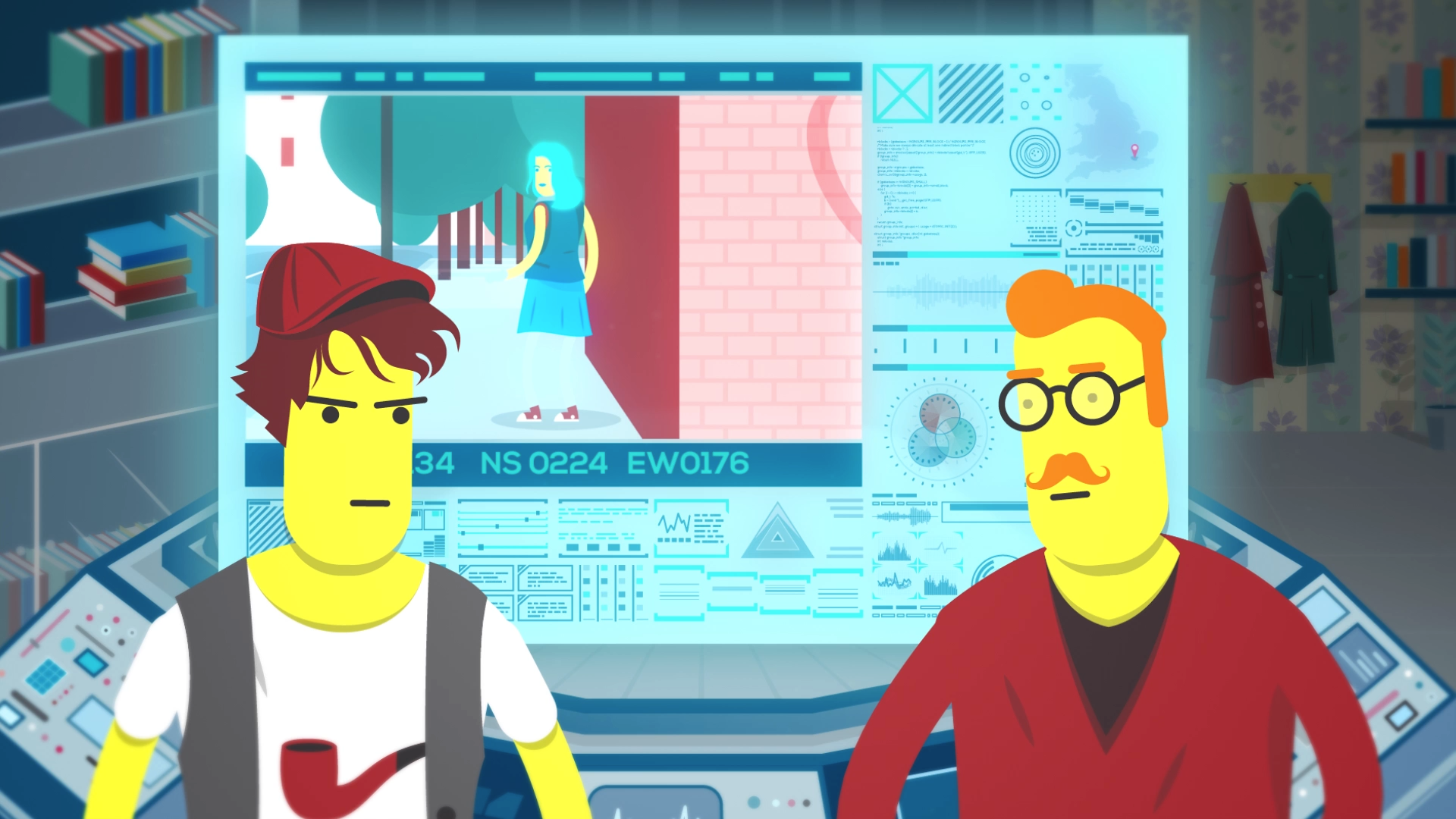 Sherlock Holmes and John Watson in The Game is On!, by Davide Bonazzi

Following the success of the Girl with the Light Blue Hair, and acknowledging Copyright User’s place as ‘the most visited UK copyright information website’, the Authors’ Licensing and Collecting Society (ALCS) Support & Sponsorship Committee funded the production of a second episode: The Adventure of the Six Detectives. Inspired by Luigi Pirandello’s Six Characters in Search of an Author and Stephen King’s Secret Window, Secret Garden (among many other sources), Six Detectives and its accompanying Case Files address the copyright knowledge needs of audiovisual writers. As with the Girl with the Light Blue Hair, episode 2 is a standalone, open-ended adventure.

During the production process for episode 2, we had begun to conceive of The Game is On! as a series of six interrelated films, each with its own standalone story but with a metanarrative threading through all six. Moreover, we decided that each episode could address a key creative sector as well as a discrete stage of the filmmaking process started taking shape.

In a Vietnamese restaurant in Angel (London), we came up with an overarching narrative that would tie the first two episodes together with four more. That metanarrative was, itself, loosely inspired by films such as Blade Runner, Inception, Matrix and Shutter Island as well as Dante’s Divine Comedy. The opportunity to transform two standalone short films into a series of six was offered by the AHRC Creative Economy Highlight notice in Follow-on Funding Scheme in 2016. In collaboration with Queen’s University Belfast, CREATe was awarded the project Unlocking Co-creative Possibilities, aimed at improving the ability of creators and creative entrepreneurs to generate value from co-creative practices by increasing knowledge of the opportunities within copyright law. As part of the project, Bartolomeo Meletti was seconded to the British Film Institute, with the goal of capturing the knowledge needs of filmmakers by collaborating with the BFI Rights and Contracts department and the BFI Film Academy. 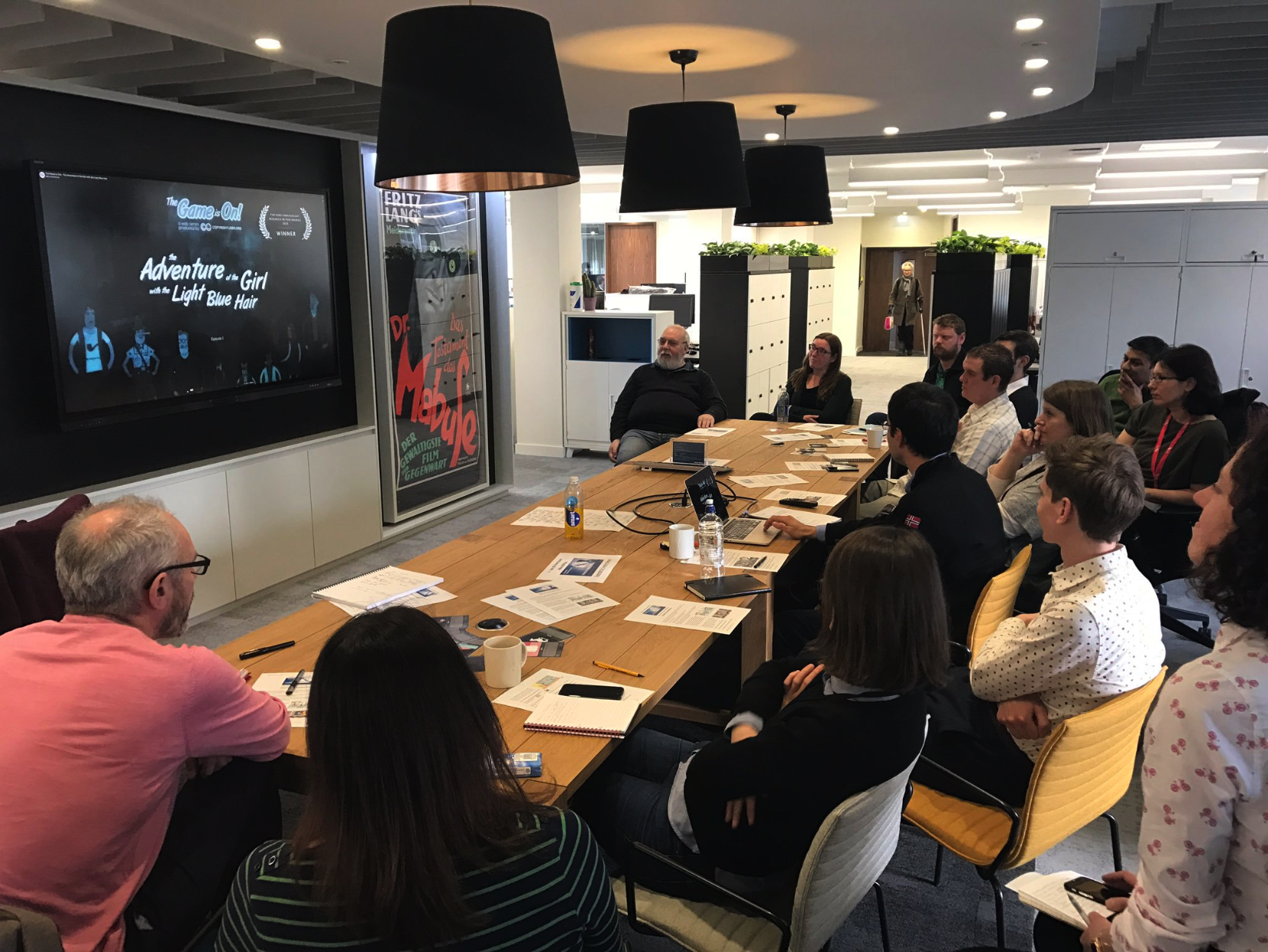 The Game is On! screened at the BFI offices

Completing the series with four more episodes has been an engaging co-creative process. Since episode 3, a new illustrator – Ilaria Urbinati – joined the creative team, and we had the opportunity to work on episode 4 – The Adventure of the Missing Note – with the composer Adriano Cirillo, a former pupil of the Oscar winning composer, Nino Rota (in episode 4 we make use of one of Rota’s most iconic compositions). The core creative team has remained the same throughout the six episodes, including Marco Bagni (art direction and animation), sarc:o (music and sound design), and Cliff Chapman (Sherlock Holmes’ voice). 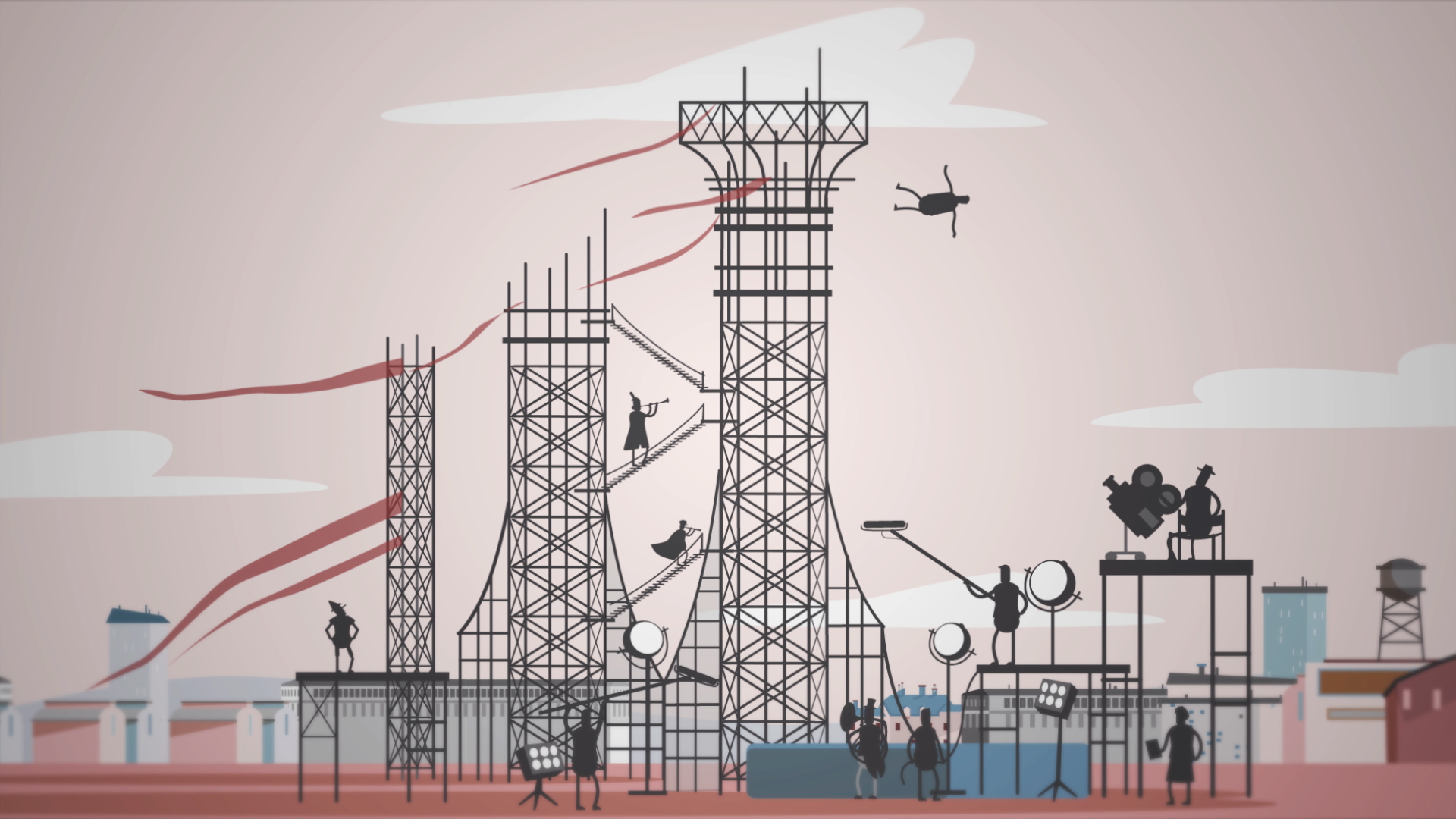 The film set of the Forger’s Apprentice, by Ilaria Urbinati

The complete series of six short films was finally launched and screened on 29 September 2018 at the Global Congress on IP and the Public Interest in Washington, D.C. After the screening, Prof. Peter Jaszi (American University) applauded the resource as ‘magnificent’ and the first ever copyright education initiative that adopts audiovisual language (as opposed to trying to translate text into video, as other previous initiatives).

The resource has been widely used in the Higher Education sector both in the UK and internationally. For example, Professor Alain Strowel at the Saint-Louis University (Brussels) has developed an online preparatory activity for their IP students around TGIO; and Professor Michael Handler at the University of New South Wales (Sidney) uses TGIO and its Case Files for students presentations and class discussion. However, we soon learned that the educational potential of The Game is On! was not being fully exploited in schools and Further Education colleges. To facilitate the use of the resource in FE and schools, the UK Intellectual Property Office commissioned Worth Knowing Productions to develop a suite of educational materials based on The Game is On! as well as a trailer for the series. This new teaching resource – consisting of 33 teaching notes (one for each case file), introductory guides to copyright law, curriculum links, and a follow-on activity Create It Yourself: The Game is Still On! – is now freely available at https://crackingideas.com/third_party/the+game+is+on.

As someone once said: ‘The game’s afoot!’