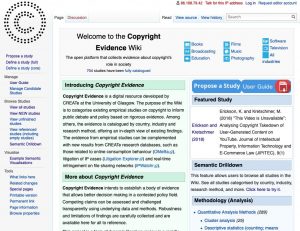 To view the full Wiki click here or the image above.

This is part of a series of summary posts rounding-up new entries to the Copyright Evidence Wiki (organised thematically). As part of CREATe’s workstream for the AHRC Creative Industries Policy and Evidence Centre, the Wiki catalogues empirical studies on copyright. This month, we summarise new studies on: Negative Space and Copyright and Game of Thrones.

A study by Sarid (2014) details the difficulty in protecting drag queen performances with copyright, and how the community has instead come to regulate itself through “gentlewoman’s understandings” and an enforcement system of boycotts, professional isolation and humiliation for transgressors. The author suggests that part of the community’s hesitation to engage with copyright is due to the overarching message of the drag queen community itself – namely to challenge mainstream conventions (rather than codifying norms in hard law).

Fagundes and Perzanowski’s (2019) fascinating study on “Clown Eggs” provides an insight into the self-regulation of creativity in clown subcultures, and the use of a traditional central registry for clown makeup (via – bizarrely – eggs). They find that a formalised central registry compliments community norms, offering clowns an opportunity to signal professionalism, belonging, and prestige.

Copyright and Game of Thrones:

In the wake of the series finale, we used the Wiki to reflect on the relationship between Game of Thrones and copyright, which for six years in a row was the most-torrented TV series.

The Sandvine (2018) report, which measures internet traffic, found a notable “Game of Thrones effect” with spikes in torrent site traffic when new seasons were screening, and dips during the off-season. The report also indicated that the partitioning of popular TV shows into exclusive platforms (e.g. Game of Thrones on HBO, House of Cards on Netflix, The Handmaid’s Tale on Hulu etc.) may be partially responsible for recent increases in piracy as user cost and inaccessibility also increases.

Throughout Game of Thrones’ lifespan, piracy rates in Australia were particularly high, resulting in two interesting studies from this region. Dootson and Suzor (2015) attributed high rates of infringement to the “Australian tax”, and outdated geoblocking practices which saw the series delayed in release and highly priced. Being left out of the “cultural buzz” and global Thrones discussion led some users to feel morally justified in accessing the series illegally. This echoes MacNeill’s (2016) findings, who analysed Facebook user comments responding to a chastisement by the US Ambassador to Australia (who linked huge infringement rates to the depression of the US creative labour force). Many users responses to this demonstrated a sophisticated knowledge of Australia’s particular market dynamics, which would best describe piracy in this instance as “paying the iron price” in the face of a monopolistic distribution system.

Infringement aside, author George R.R. Martin has famously been opposed to the notion of fanfiction, feeling strongly that he alone should be writing in the Song of Ice and Fire universe. A study by Sarikakis, Krug and Rodriguez-Amat (2017) explored this in relation to the notion of “authorship” in fan communities, finding that fans in fact replicate the status quo in recognising (and often romanticising) GRRM as the mythical, romantic primary creator. This applies to the extent of excluding their own work from the community; hypothetical scenarios or speculations have even been removed from forums for transgressing on GRRM’s creative process.

See something missing from the Copyright Evidence Wiki? Propose a new study here.