CREATe at the Law and Technology Consortium (LTC) in Trento: The Game is On! – Lawful copying under UK copyright law

CREATe at the Law and Technology Consortium (LTC) in Trento: The Game is On! – Lawful copying under UK copyright law

By Bartolomeo Meletti22 May 2019No Comments

On 6-7 May 2019, I attended the first meeting of the Law and Technology Consortium (LTC), held at the University of Trento (Italy). LTC is an international and informal consortium of research centres and institutions seeking to establish a collaborative network and share scientific knowledge and expertise in the field of law and technology. Coordinated by Prof. Roberto Caso (University of Trento) and Prof. Gideon Parchomovsky (University of Pennsylvania and Hebrew University of Jerusalem), the Consortium aims to facilitate research collaboration and mutual exchange of experiences on research topics related to law and technology.

View from the University of Trento, Faculty of Law

During the first day of the meeting, I presented an idea paper titled ‘The Game is On! – Lawful copying under UK copyright law’. The paper aims to investigate how different forms of lawful copying have evolved under UK copyright law over the last few years, examining the role that creative practice can play in defining the scope of permitted acts. Following the introduction in 2014 of new fair dealing exceptions for quotation and for caricature, parody or pastiche, the scope of lawful copying within UK copyright law has expanded considerably. Before 2014, only two exceptions allowed creators to deliberately reuse protected works for their own creative and artistic purposes: criticism or review (s30 CDPA) and what is commonly referred to as ‘freedom of panorama’ (s62 CDPA, ‘Representation of certain artistic works on public display’). These exceptions offer limited artistic freedom though: criticism or review is limited by purpose (you can benefit from it only if the reason for using the protected material is genuinely for the purpose of criticism or review), whereas s62 only applies to certain types of work (buildings, sculptures, models for buildings and works of artistic craftmanship on public display) and use (it only allows making a graphic work representing the protected material, a photograph or a film of it, or making a broadcast of a visual image of it). Under the new quotation exception provided by s30(1ZA) CDPA, you can quote from any type of copyright work ‘for criticism or review or otherwise’. As such, quotation is the first ever UK fair dealing exceptions that – similarly to the fair use doctrine in the US – is not limited by purpose. On the other hand, the exception for caricature, parody or pastiche (s30A CDPA) is limited by purpose, but the purpose itself, in particular pastiche, is a creative one. You can use other people’s works for the purpose of creating a pastiche of those works. With the introduction of these two fair dealing exceptions, now UK copyright law potentially allows creative practices based on the reuse of existing materials and for which the rights clearance mechanisms are not suitable or unrealistic because of the numerous, low value uses involved (e.g. appropriation art, found footage filmmaking, mash up videos, memes, among many others).

To demonstrate and celebrate these new creative opportunities offered by the law, in 2014 Professor Ronan Deazley (Queen’s University Belfast) and I started producing The Game is On! resource, a series of short animated films that offer a springboard for exploring copyright, creativity and the limits of lawful appropriation and reuse. The resource consists of 6 short animated films and 33 Case Files, supplementary educational materials that offer points of discussion around copyright for teachers and students. In creating the films, Ronan and I adopted appropriation as a creative technique. Across the six films, in just over 20 minutes, we have copied or borrowed from other people’s materials around 500 times; or on average, twice every 5 seconds (we have kept track of this creative process in a set of annotations which you can access in Case File #33).

While we have often copied insubstantial parts of or ideas underpinning protected works, out-of-copyright works or materials distributed under open licences such as Creative Commons, in general we have used substantial parts of protected works under copyright exceptions. In doing so, the exception we have mostly relied on is the quotation exception. The following two examples are particularly illustrative: 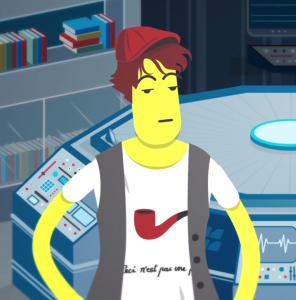 Illustration by Davide Bonazzi for The Game is On!

We decided to depict the iconic pipe element of the Sherlock Holmes character by reusing René Magritte’s The Treachery of Images on Sherlock’s t-shirt. We didn’t have any particular purpose in mind, definitely not one of those prescribed by the UK copyright act. We just thought that reusing Magritte’s work in this way would have added artistic value to our piece. As the quotation exception is not linked to any specific purpose, we believe our use is allowed by s30(1ZA) CDPA.

In other cases, we have reused highly recognisable works in a very explicit way:

In episode 4 – The Adventure of the Missing Note – we have copied the main melody of the Love Theme by Nino Rota, the famous track that accompanies Francis Ford Coppola’s The Godfather. We used exactly the same notes of the protected composition, changing its timing, phrasing and effect. In this case we did have a reason to quote this particular work: we wanted to tell the story of how Nino Rota’s nomination for an Oscar in 1972 was withdrawn because the Academy found out that Rota had reused a composition he wrote for another film (Fortunella) in 1958 (for more information, see Case File #30). However, such use is unlikely to be considered for the purposes of criticism or review under s30. Once again, we relied on the open-ended quotation exception.

In the absence of UK case law addressing s30(1ZA) CDPA, how can we establish whether the uses described above would be covered by the quotation exception? Professor Lionel Bently (University of Cambridge) argues that, as the quotation exception applies to all types of copyright works, we need to find an idea of quotation that reflects how that term is understood across the different cultural sectors. The conventions traditionally associated with literary quotation – such as the use of quotation marks, shortness, non-modification, incorporation, referencing back or distinctness – would exclude much that is ordinarily called ‘quotation’ in art, music or film from any possibility of exemption. To explore how much freedom this new exception provides, Bently examines how commentators such as art historians and film scholars define quotation in their own cultural field. For example, art critics and historians consider the three foregrounded figures in Manet’s Le Déjeurner sur l’herbe a quotation of Marcantonio Raimondi engraving of Raphael’s Judgment of Paris. Similarly, film scholars repeatedly describe as quotation the re-enacting of the famous pram scene from Sergei Eisenstein’s film Battleship Potemkin in Brian De Palma’s The Untouchables. 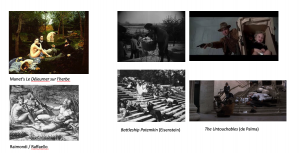 Through an examination of various similar examples, Bently concludes that – compared to text-based quotation – quotation in art and film does not require explicit commentary or referencing back; it can be transformed; it can be incorporated seamlessly into new work; and the quotation can be of a whole work. Bently’s interpretation of the quotation exception would therefore support the lawfulness of our uses of Magritte’s and Rota’s works in The Game is On!

AG Szpunar, in his Opinion on the CJEU Case C-476/17, Pelham GmbH v. Hutter, takes a very different approach. According to AG Szpunar, the wording of Art. 5(3)(d) of Directive 2001/29/EC (the quotation exception in EU law) clearly indicates that ‘the quotation must enter into some kind of dialogue with the work quoted’; ‘the extract quoted must be incorporated in the quoting work as such or, in any event, without modification’; and ‘the quotation must be incorporated into the quoting work so that it may be easily distinguished as a foreign element’. If the CJEU were to follow this restrictive interpretation, the uses of protected works described above would be automatically excluded from the scope of application of the quotation exception.

However, even if this will be the case, we can probably rely on the other fair dealing exception introduced in 2014: caricature, parody or pastiche. In a sense, The Game is On! could be considered a pastiche of existing works and cultural references. Dr Emily Hudson (King’s College London) has recently conducted research around the pastiche exception, analysing the meaning of the term ‘pastiche’ in light of principles of statutory interpretation and of judicial interpretative practices (Hudson E., 2017, The pastiche exception in copyright law: a case of mashed-up drafting? Intellectual Property Quarterly). Hudson’s conclusion is that the new exception gave the UK a defence covering mash-ups, fan fiction, music sampling, collage, appropriation art and other forms of homage and compilation. According to Hudson, pastiche should be read broadly to include a range of uses, including the imitation of the style of pre-existing works, the incorporation of elements or features of those works, and the production of compilations and medleys. Hudson’s interpretation seems to have been adopted by major UK cultural institutions, including the Tate Modern. Since September 2018 to January 2019, the Tate Modern has been screening Christian Marclay’s controversial film The Clock. The Clock is a 24-hour long film, consisting of thousands of clips, all of which show a clock or a watch indicating the actual time when you are watching the film. Although Marclay did not get permission from the copyright owners to use those clips, the Tate Modern screened the film confident that it is undoubtedly a pastiche and therefore covered by s30A CDPA.

What role, if any, can these real-life examples play in defining the boundaries of exceptions such as quotation and caricature, parody or pastiche? How can one identify and capture creative practices that carry weight in law? These are the questions I would like to explore through my research. Leading work in this area has been conducted by Professors Peter Jaszi and Patricia Aufderheide at the American University, who developed the successful format of the Codes of Best Practices in Fair Use. As Prof. Gideon Parchomovsky pointed out at the LTC meeting, conducting similar exercises in a UK and/or EU context would present the same challenge faced by Jaszi et al: contextualisation. Given the wide range and diversity of creative practices based on the reuse of materials, how can you reach meaningful consensus among creators on what constitutes fair and acceptable behaviour?

It was great to have the opportunity to discuss these questions and thoughts with a group of leading scholars from different disciplines who share research interests in the field of law and technology. The next meeting of the LTC is likely to take place at McGill University in Montreal in 2020.