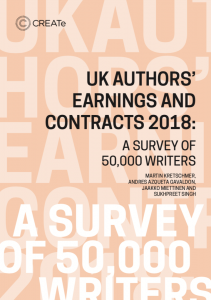 CREATe has released a study of UK Authors’ Earnings and Contracts based on a large scale survey of 50,000 authors conducted in 2018. The survey was funded as independent research by the UK Authors’ Licensing and Collecting Society (ALCS), and is a re-run of a survey first conducted in 2006 (also led by Kretschmer), and repeated in 2014 (by Gibson, Johnson & Dimita out of Queen Mary, University of London). This series of surveys offers one of the first opportunities to assess robustly the effects of digital changes on the labour market and working conditions of a specific professional sector.

Surveys of creators’ earnings consistently demonstrate the presence of winner-take-all markets. Thus it is unsurprising that there is a large gap between the earnings of successful writers and the rest. This has increased since 2006 but the pattern has remained similar. The top 10 percent of writers still earn about 70% of total earnings in the profession. However, the current survey found a dramatic drop in average and median earnings. The nominal average (mean) earnings stagnated, changing from £16,531 in 2006 to £16,809 in 2014 to £16,096 in 2018. Accounting for inflation, this is a drop over 12 years of 49 percent over a period of time in which the UK creative industries reached £100bn GVA and have grown at nearly twice the rate of the economy since 2010. (DCMS Sectors Economic Estimates 2017: GVA, Department for Digital, Media, Culture and Sport, 28 November 2018. Available at: https://www.gov.uk/government/news/britains-creative-industries-break-the-100-billion-barrier)

Why is this apparent decline in author pay occurring? Are new (digital?) sources of revenue not passed through? Does the decline in value for creative craft create disincentives? Should it trouble policy makers? These are difficult questions. Some might say that writing is ‘cheap’. There are no large overheads. Many writers write in addition to engaging in other professional activities. They have made personal choices how to allocate their time. Yet even when screening out occasional or part-time writers, the picture remains startling. As the key sample for comparing developments over time, the study defines a sub-group of writers who spend at least half of their time writing. These ‘Primary occupation writers’ are people who clearly aim to make a living from writing and engage in sustained and professional effort to achieve this.

For this group, the survey shows a drop in real terms (accounting for inflation) of 42 percent in median earnings from an equivalent of £18,013 in 2006 to £10,497 in 2018, continuing a downward trend seen already in the 2014 survey.  (The median calculates the mid-point of the population, i.e. 50 percent of the population of primary occupation writers earn less than £10,497 per annum.)

Given that it is impossible to survive on an annual income of some £10,000, the survey also tracks household earnings. Households are the economic unit in which means must meet ends. It is a striking result that, as households, writers are doing rather well. Average (mean) earnings are over £81,000 per annum, typical (median) earnings £50,000 per annum. And the inequality within the profession is somewhat smoothed out. The top 10 percent of ‘primary occupation’ writer households earn about 40 percent of total earnings of their group.

The fact that this household ‘subsidy’ is needed to make a living may contribute to the lack of diversity among writers. It is well known from demographic data (confirmed by our survey) that writers are mostly white (94%) and live in the South East. Is writing becoming more elitist as a profession?

Primary occupation and Full income authors as % of population
Despite the decline in earnings, there does not seem to be a decline in the supply of writers. A similar percentage of the population of writers is prepared to allocate half of their working time to writing or concentrate on writing as their sole source of income. Primary occupation writers as percentage of all writers have moved from 46% (2006) to 51% (2014) to 48% (2018). However, primary occupation writers who are able to live from writing alone (those who do not hold a second job) have declined from 40% (2006) of their group to 28% (2018), a decline of 12%.  It appears to have become significantly harder to become a full-time writer.

Sources of Earnings
Publishing contracts remain by far the most important source of earnings for writers. While lectures and creative writing classes are seen by commentators as an increasingly important aspect of a writing career, for the typical writer they are not a decisive source of income. Compared to the 2006 survey, earnings from grants and bursaries have declined dramatically. In 2006, income from grants and bursaries for Primary occupation writers was £4,960 (mean) and £3,450 (median). In 2018, this has fallen to £730 (mean) and £0 (median: i.e. half of the sample of primary occupation writers did not receive any).

Professional life of authors
The earnings of authors show a typical life time curve, peaking in the 35-44 age group when primary occupation writers earn £37,000 (mean) or £17,000 (median) per annum, then declining to £24,000 (mean) or £6,000 (median) at age 65 and above. Since 2006, successful writers have become younger. In the 2006 survey, earnings peaked at age 55-64. Interestingly, the level of education (e.g. if writers are educated to GCSE, A-level, degree or postgraduate level) does not predict higher earnings. The earning power of writers appears to peak for those who are educated to just under degree level. This is in contrast to so-called ‘human capital’ models under which education is understood as an investment in future earning power.

Audio-visual writers
Authors who have earnings from audio-visual sources (such as screen plays) show a distinct earnings profile. On average, they have higher earnings (£35,000 mean) but these are even less predicted by education levels. In fact, having a degree or masters seems to depress audio-visual writers’ earning power. Industry experience clearly matters more, with TV drama (£97,000 mean earnings) and TV comedy (£93,000 mean earnings) being the most lucrative genres. There is also less of a household subsidy, and less of a (still considerable) gender gap in earnings, with females on average earning 86% of male earnings.

Contracts:  Bargaining and reversion
There is a clear association between contractual and copyright awareness, and earning power. Those who take professional advice and attempt to change terms in their contract earn significantly more than those who don’t. The causal story however is complex. The data indicates that experienced and successful authors are more likely to bargain. For example, the survey finds that more financially successful authors use the reversion clause (under which publishing rights or copyright reverts back to the author if the publisher is no longer exploiting the work) – but are they more successful because they use it, or should the explanation be the other way around?

Contracts: Advances and buy-outs
69% of primary occupation authors say that they have received an advance. In 2006, 82% in this group reported receiving advances. This represents a 13% decline and a shift in risk to primary creators, which may in part explain the decline in author pay overall. The use of buy-out contracts (where there is a single payment for use of the work without royalties) however does not appear to be increasing, and median royalty rates have been stable at 10% for a hardback and 8% for a paperback.

International Context
The findings of this survey confirm an international trend. A number of surveys have reported low and falling incomes for writers.