EU Copyright Reform: What you may have missed

EU Copyright Reform: What you may have missed

Next Tuesday, March 26th, will be the final plenary vote on the Copyright in the Digital Single Market Directive. The focus has been on Articles 11 (press publishers’ right) and 13 (licensing obligation leading to upload filters), with demonstrations, petitions and blackouts, for example of the German, Czech, Danish and Slovak Wikipedia sites.

This blog post will look at some of the lesser-known 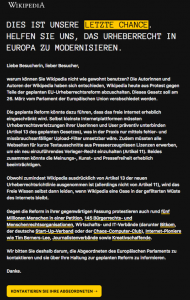 provisions of the proposed Directive (and what provisions we’ve lost and gained since the original Commission draft in 2016). The discussion is based on the final compromise text agreed on 13 February available here.

At present, the legality of TDM activities in the EU is uncertain, in part due to the narrow construction of existing copyright exceptions under Article 5(3) of the InfoSoc Directive. In order to clarify the status of such activities, the new Directive proposes to explicitly except TDM activities from copyright infringement, in a hope to boost research into important areas such as Artificial Intelligence (AI).

The compromise text only provides for a mandatory exception for TDM where it is (i) conducted for the purposes of scientific research (ii) by a research organisation or cultural heritage institution. Concerns regarding this very narrow interpretation were raised as early as 2016 (during the original Commission proposal) by commercial research analysts and technology companies concerned that this would expose them to potential liabilities. Article 3a sought to remedy this by allowing for all other users to benefit from a TDM exception where (i) they have lawful access to the work and (ii) the right holder hasn’t specifically objected to TDM activities. These conditions introduce some uncertainty to the new exception:

This is a complicated set of rules for a provision seeking to answer a legal uncertainty.

The new Directive proposes to harmonise and facilitate cross-border teaching practices, and the use of digital materials for teaching purposes, free from copyright concerns. Since the trilogue process however, the new exceptions granted in Article 4 have been described as “gutted”.

Many of these provisions have been heralded as a “win” for cultural heritage institutions and the public domain, beginning with Article 5 which creates a EU-wide exception for the preservation of materials (even if they’re in-copyright) by museums, libraries, archives etc.

However, the exception under Article 7(1a) that permits cultural heritage institutions to make available out-of-commerce works for non-commercial purposes is immediately turned into a licensing mechanism. Under Article 7(1b) the new exception only applies if there is no collective management organisation offering a licence.

A new Article 9a, which allows Member States to voluntarily introduce Extended Collective Licensing schemes has the potential to assist with mass-digitisation efforts.

A new Article 10b also has been introduced, which denies copyright protection to reproductions of visual art that are already out of copyright. This will harmonise reuse of photographs of certain public domain materials across the EU, where otherwise the reproduction of such works may attract neighbouring rights in certain countries. The provision is limited to “works of visual art” only – a term which is undefined. Whilst some have welcomed this addition, others have criticised it as jeopardising important sources of revenue for cultural heritage institutions.

Articles 14 – 16 aim at improving the position of individual authors by preventing unfair licensing practices and forced “buy out” contracts. This has been bolstered by creating new provisions on contract transparency and adjustments (to ascertain and return appropriate amounts of remuneration) and revocation of licences or transfers where there is a lack of exploitation of a work.

Article 16a that was in neither the Parliament’s or Council’s adopted negotiation positions offers a potentially powerful Right of revocation: “Member States shall ensure that where an author or a performer has licensed or transferred her or his rights concerning a work or other protected subject-matter on an exclusive basis, the author or performer may revoke in whole or in part the licence or the transfer of rights where there is a lack of exploitation of the work or other protected subject-matter.”

Regarding a general “Principle of appropriate and proportionate remuneration” introduced as Article -14, Recital 39y of the final compromise now clarifies that “lump sum” payments can constitute acceptable remuneration. So potentially exploitative total buy-out contracts appear to remain possible (limiting the possibility of claiming additional payments under the contract adjustment provisions of Article 15).

What got dropped along the way?

Sports Organisers’ Right – The negotiation mandate approved by the European Parliament in September 2018 included a new Article 12a providing for a sport event organisers’ exclusive right to record events and make them available through publication, broadcast etc. This right would apply in addition to the existing “related right” for broadcasters, and was said to be targeted at clips used by betting sites. Since no Impact assessment was conducted about this provision, academics had recommended rejection at our September intervention. The provision has now been abandoned and is absent from the final compromise text.

Freedom of Panorama – Despite many calls to harmonise freedom of panorama (i.e. permission to take photographs of copyright works located in public spaces) this has not been adopted in the final compromise text (having been supported as part of the Parliament’s vote on the Reda report in 2015 and briefly re-appearing as Article 5a of a JURI report in 2018).

Recent interviews by academics, assessing the Directive as a whole:

Is it possible to have an independent, evidence based position in this debate?
https://corporateeurope.org/power-lobbies/2018/12/copyright-directive-competing-big-business-lobbies-drowned-out-critical-voices