In the first of CREATe’s Autumn 2018 Public Lectures, Dr. Claudy Op den Kamp (Bournemouth University) presented her upcoming book, A History of Intellectual Property in 50 Objects, co-edited with Professor Dan Hunter (Swinburne University of Technology). As Dr. Op den Kamp discussed, the book offers a jargon-free approach to IP by bringing together contributions from a multitude of academic fields. It is “an academic publication mixed with a coffee table book”, offering generous art-work and a range of stories from as early as the 12th century. The lecture took place on the 24th of October in Glasgow University’s Humanities Lecture Theatre, with Bartolomeo Meletti (CREATe, University of Glasgow) as chair. 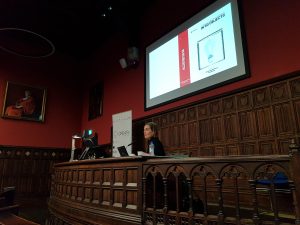 After several roundtable events, the editors selected the 50 objects that have helped to shape, and have been shaped by, human interactions. Each chapter uses the story of a broader notion of “object” (since it also comprises intangible things like the internet and the bitcoin), but also draws on the underlying impacts of their creation on IP in particular, and society as a whole. By adopting a user-friendly approach, the editors opted to provide several ways to read the book. Colour bars allow readers to follow objects through different IP ages, regimes, themes, or even navigate through images to retell the individual entries’ stories. 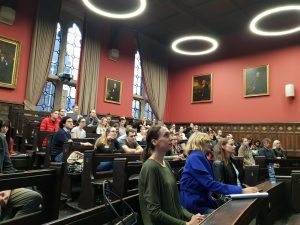 The story behind each particular object constitutes part of an intertwined narrative about philosophical underpinnings and temporal marks of IP. For instance, the chapter on Sony’s Betamax describes relevant aspects of a US Supreme Court case, but also raises issues represented by the time-shifting component at the heart of case, which has come to structure modern media consumption. In the chapter on the Barbie Doll, the canonical separation between idea and expression is highlighted by the company’s attempt to protect the image of its toys. The entry on the Bell Telephone discusses the myth of the lone inventor and the importance of being first in patenting, whilst the chapter on the Bell Transistor offers a complementary debate on the role of collaborative efforts to innovate. Other objects raise similarly relevant issues, like the changing concept of invention (Climbing Rose), the pillars of modern copyright (Tempesta Map of Rome), and creativity and the public domain (Sherlock Holmes’ Deerstalker).

Dr. Op den Kamp also offered an insightful consideration by discussing the book itself as the 51st object, providing a story of its own about IP theory versus cultural practices. In particular she discussed the problems involved with rights clearances, including issues such as paying fees to obtain high resolution versions for images in the public domain; and orphan works, which in the case of the Singer Sewing Machine has led to a curious request by the potential rightsholder of the images. The book also involves many interesting considerations of fair use.

A History of Intellectual Property in 50 Objects, edited by Claudy Op den Kamp and Dan Hunter will be available in February 2019 via Cambridge University Press (publication details available here).