By Kerry Patterson13 July 2018No Comments 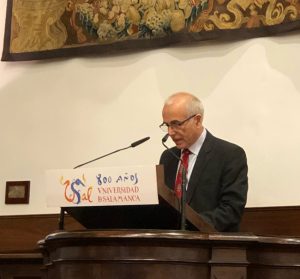 Professor Schlesinger’s citation noted his long-standing and wide-ranging work in the field of communication, culture, and related public policy questions, and also his international distinction.

His contributions to academic leadership and publication in the field of communication while at the Universities of Glasgow and Stirling were noted. Special attention was drawn to his sensitivity to, and knowledge of, Latin American work and his contribution to its dissemination.

In response to an oration that discussed his work, Professor Schlesinger, speaking in Spanish, reflected on his long-standing links with friends and colleagues across Spain and in Latin America, including his research collaborations and visiting professorships at several universities.

He expressed deep appreciation for the symbolic gift of recognition he had received. Aside from collaborating with successive generations of colleagues in Spain, he was delighted that at the University of Glasgow, and before that at Stirling, his research centres had been major points of attraction for visiting fellows and PhD candidates from the Spanish-speaking world.

Professor Schlesinger also spoke about how, at a time of danger in Europe, given the closing of borders and the reappearance of darker aspects of our history, the academic quest for rational inquiry and the huge value of international connections was more important than ever.