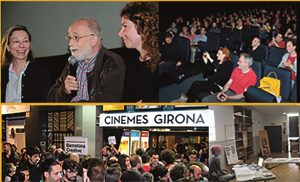 The CREATe  Open Film: Open Source project has achieved a striking success in getting two linked articles accepted for publication in the journal Information, Communication and Society.

The paper examines attempts to establish an Open Content Filmmaking (OCF) movement. Early expectations that Creative Commons (CC) licences would enable a viable alternative to mainstream film production, comparable to free/libre open source software (FLOSS), were challenged, in particular by the difficulties experienced in establishing viable livelihoods with OCF. This created tensions between those with a pragmatic or more ideological orientation. The initial vision of OCF became fragmented as creators worked out ways to utilise CC tools in producing, monetising and distributing their films.

This paper revisits these developments at a later stage and from the different perspective of the independent filmmaking sector. Challenging narratives of the failure of OCF, it shows how OCF practices became adopted as mundane elements in a film production and distribution system that itself has been, and continues to be, dramatically changed by digitisation. These observations highlight that limiting the scope of investigation to short-term ‘snapshot’ studies centred around  particular groups/viewpoints may yield flawed interpretations and premature judgements. Extending research longitudinally and across settings allows insights into the social learning processes through which artefacts and practices evolve.

An overview of the project is available here.