New Working Paper: Modelling the Evolution of the TV Drama Production Sector in the UK 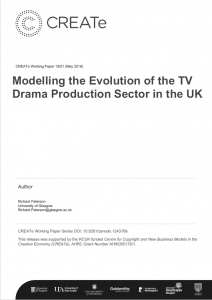 Now available is a new paper in the CREATe Working Paper series: Modelling the Evolution of the TV Drama Production Sector in the UK by Richard Paterson.

Richard Paterson is a Senior Research Fellow and Honorary Professor at the Centre for Cultural Policy Research at the University of Glasgow. He was a CREATe Industry Fellow and the former Head of Research and Scholarship at the BFI. This exploratory paper considers the evolution of drama production companies in the UK against the backdrop of regulatory interventions. It poses the question of what was it that made a successful drama production company as the context of TV production changed.

The full abstract and downloadable paper can be accessed from here: Modelling the Evolution of the TV Drama Production Sector in the UK.

This entry was posted in CREATe Blog. Bookmark the permalink.