By Admin6 April 2018No Comments

Robin Williams reports on University of Edinburgh research into the emergence of infrastructures for managing and potentially trading IP for cultural products, for the Research Blog Series. 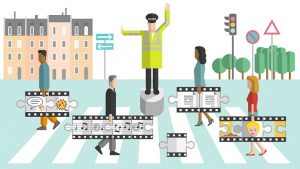 What did your research aim to do?
Over the last decade, the UK government has made a number of recommendations to re-evaluate its current Intellectual Property (IP) framework, the last of which led to the creation of a Copyright Hub. This was the major case in this study of the emergence of infrastructures for managing and potentially trading IP for cultural products. We examined the emergence of the Copyright Hub in relation to previous government initiatives. Our analysis offers novel insights into the complex dynamics shaping the outcome of government-industry partnerships.

This study has also advanced conceptual frameworks to address the temporal dimension of innovation drawing upon Garud and Gehman’s (2012) durational perspective and Abbott’s (2005) notion of ‘linked ecologies’. This moves the frame of analysis beyond its traditional focus on particular technology projects, with their typical linear narratives of whether or not planned and implicitly shared technical outcomes could be achieved.

How did you do it?
We documented key phases in the history of the project, and described an interplay between the expectation work carried forward by technology research teams, the ongoing controversies in the development of creative industries and the (often shorter term) exigencies of public sector policymakers. To this end we conducted longitudinal historical and ethnographic study, covering a period from November 2010 to November 2015 and including forty-six interviews with informants from the Creative Industries, UK Government and research institutions. In addition to conducting and analysing interviews, the study involved a six-week field trip to observe work routines and collaboration meetings in the Copyright Hub and its sponsor, the UK Digital Catapult. The study has also collected project proposals, meeting minutes and technical blueprint from key organisations such as the Copyright Hub, the Digital Catapult and the Linked Content Coalition.

What are your key findings?
From the onset, we had observed that discussions around the copyright Hub initiative were shaped by an instrumental understanding of technology – tacitly pursuing a linear account of the unfolding of a potential innovation emerged in a planful way, acquiring resources to progress from initial concepts to technical standards to achieve desired outputs and fulfil planned criteria for success.

Instead, we have sought to provide an alternative approach to understanding IP reform and a concurrent account of the Copyright Hub based on historical studies of previous initiatives, as well as on a systematic review of UK government’s policy and legislative reviews. These includecthe Gowers Review in 2006, the Creative Britain report in 2008, the Digital Britain report in 2009 and the Digital Economy Act of 2010. We found that the development of a digital infrastructure for IP trading is an ongoing battlefield between key stakeholders. These include the Copyright Hub as the major actor in UK Government’s IP reform programme, the creative Industries and their contraposition with global ICT players over unlawful exploitation of copyrighted content. Our analysis highlights the role played in this by a set of research actors developing a vision of IP reform which progress over a long timeframe, from ‘blue sky’ research on modelling for data interoperability, to the Digital Catapult (a ‘translational infrastructure ‘in charge of matching commercial open data initiatives with relevant research findings).

What impact has your work had so far/what impact do you anticipate it will have?
Our study provides an insightful, contemporary account of the Copyright Hub’s development – one of the latest attempts to intervene in the copyright world by means of technological advancement. Our findings have value for diverse audiences. For the UK government, this study serves as an independent review of the Copyright Hub project, as well as an update on the government’s decade-old agenda on reforming the UK’s IP framework. For a group of infrastructural entrepreneurs who have been engaged in building the Copyright Hub and similar projects, this research offers valuable lessons on successful strategies for making alliances across multiple ecologies, pitfalls to avoid during the collaborative process, and mitigation plans when linkages between these linked ecologies are broken down. For innovation scholars, we contributed new knowledge on the durational perspective from within the “linked ecologies” framework.

In addition, we anticipate our research will pave the way for a comprehensive exploration of the development of infrastructures for IP (a niche area which is still neglected by conventional studies of infrastructure). Developing a digital infrastructure for streamlining IP management and licensing processes is not a new idea. In fact, it can be dated as far back as the mid-1990s with the establishment of the <indecs> project. The past twenty or so years  witnessed the creation of a dozen more or less similar initiatives which, for the most part, were either completely forgotten or gradually faded into the historical background of standard development. Consequently, valuable lessons on the successes and failures of these projects might be lost. This underpins our call for a more systematic study on the subject.

Challenges encountered/Lessons learned
Studying an innovation-in-the-making made research design a challenging task. In particular, it was not possible for the research team to decide beforehand the range of actors and settings  to be addressed, nor when data collection should be cut off. Instead of making a rigid plan, we developed our research design based on preliminary understanding of the field (i.e. through a short pilot study) and adjusted and adapted the plan as the field evolved. For instance, it was originally planned that field trips and interviews would be finished by the end of 2015. Nevertheless, the resignation of both the chairman and CEO of the Copyright Hub in the first quarter of 2016 and the change of the project’s direction after ending its strategic partnership with the Digital Catapult required us to conduct further fieldwork in June 2016.

Collecting, analysing and presenting data collected from the field also proved to be more challenging than originally anticipated for various reasons. Due to the fact that we conducted research on an on-going project, a great amount of data collected were deemed either confidential or too sensitive to be used at the time for public dissemination. Furthermore, the majority of our participants come from a small circle of executives and experts working in the music, publishing, images and audiovisual sectors of the UK’s creative industries, some of whom have been working with one another for decades and have even become close friends.  This creates particular problems in terms of fulfilling our ethical research commitments to protect the anonymity of participants. Finally, the unfinished nature of the Copyright Hub required us to refrain from publishing some of our findings early in order to avoid unintended consequences for the project.

Are there additional/new research questions still to be answered in this area?
We have charted the end of the beginning but are still some way from the beginning of the end of these developments. How do people, practices, and technical artefacts move beyond the boundaries of the Copyright Hub project? More generally, how can innovation be understood from the viewpoints of intertwining biographies of people, artefacts and practices?

How has your association with CREATe helped to take things forward?
CREATe provided a platform through which we were able to secure access to key players involved.

Find out more in this blogpost: https://www.create.ac.uk/blog/2015/05/07/reinventing-copyright-licensing-the-copyright-hub-emergent-infrastructures-for-ip-trading/