Jeremy Silver presents research from his working paper on some technology issues at the heart of blockchain and possible opportunities for the music industry, for the Research Blog Series. 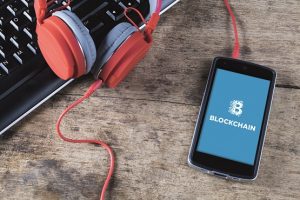 Project: Blockchain or the Chaingang? Challenges, opportunities and hype: the music industry and blockchain technologies

What did your research aim to do?
My working paper looked at how bitcoin and blockchain captured the public imagination, some of the technology issues at the heart of blockchain and a key dispute taking the bitcoin community in different directions with a bearing on possible music applications. I explored the kinds of initially superficial ways in which blockchain represented an attractive technology to the music industry and tried to capture some of the excitement and voices that have been generating so much deeper interest in the subject in relation to music.  Finally, I discussed how this might all unfold; what the opportunities and obstacles might be.

How did you do it?
I interviewed a wide range of individuals from technology visionaries, to heads of collective rights management organisations (collecting societies) to recording artists, to music managers and label chiefs.

What are your key findings?
Blockchain is a multifaceted technology viewed differently in different lights. For some, it is the ability to create a new truly distributed global repertoire database that holds the appeal. For others, the ability to pay contributors to a song quickly and fairly, is more attractive. It represents a new opportunity for individual artists to offer their wares with very low cost of transaction and very high data gathering capabilities. It may provide useful proofs of concept to be applied elsewhere in completely different sectors of the economy. Given the hype it is healthy to bear in mind the caution of most executives in the industry.

In the context of the bigger investments being made in blockchain in other industry sectors and the jostling for position between innovative reformers and conservative incumbents, music may find itself positioned here, as we have seen before, as a useful, low risk, potentially high profile partner.  If the question this raises is why would a large investor spend time and money in establishing blockchain for music, when they could make so much more impact and create so much more value in, for example, financial services and energy? Then the answer reflects music’s unique position in culture and in the economy.

Somewhere, behind the quite pragmatic arguments sits a larger spectre of the fundamental need for renewal. As the rate of consolidation in the industry increases and the pain of falling revenues continues, it may be that the industry and the broader creative community sees a way to act together to address the need for a new architecture. The truth is that the short-term power politics of this always seem to militate against the longer term strategic benefits. The level of commercial pain never seems to be sufficient in any one quarter to justify beginning an initiative that will inevitably cost money, but reduce the pain in the longer term. The possibility that an incremental series of steps could achieve something that a single big push could not is perhaps the real promise of the blockchain. If, in addition, the aspirations of open innovations such as the Berklee’s Open Music Initiative are realised, it might just be that the traditionally competing factions could find a unified core around which to compete for greater profits, more evenly distributed, in years to come.

Challenges encountered/Lessons learned
Often, when reading about scientific or technological developments in the press or online, there is an awareness that the article was published some time after the event.  In the case of the blockchain, however, with the frenzied heat of excitement that seemed to be increasing around the topic, many of the articles turned out to be at least six months ahead of the point which the technology had reached on the ground. Part of my effort was to separate hype from reality.

The blockchain is not a static technology but a set of protocols that continue to evolve rapidly. Inevitably, detail in the working paper will date quickly, but I hope that the broad scope of the research will remain relevant for some time in theoretical, strategic and policy terms.

Are there additional/new research questions still to be answered in this area?
Another linked area that has become attractive to reformers in many fields is the concept of a smart contract. The notion of a smart contract is a piece of code that runs and executes actions based on a set of pre-agreed rules, which derive from what is signed into a contract. So if an artist were to determine that their music could be licensed for use in an online advertisement for any product except for weapons, drugs, alcohol or tobacco, at such and such a price, and for a determined period in specified territories, a smart contract could be created that could be run on the blockchain or on a distributed ledger to enable the answering of any request which fit those criteria.

How has your association with CREATe helped to take things forward?
The opportunity afforded by CREATe to spend some time digging deeper into the topic of blockchain and music is one that I value greatly. The research is in large part thanks to the vision of the CREATe to encourage industry people to take a longer, deeper view of a topic than our daily business normally allows, and has been an invaluable experience.

To find out more see the working paper: https://www.create.ac.uk/publications/blockchain-or-the-chaingang-challenges-opportunities-and-hype-the-music-industry-and-blockchain-technologies/