By Admin5 March 2018No Comments

Richard Paterson presents his research on the changing Business Models of TV Drama production companies, for the Research Blog Series. 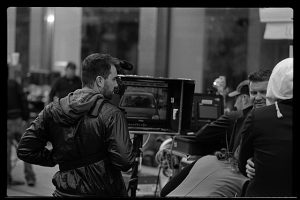 Project: Modelling the Evolution of the TV Drama production sector in the UK

The project was initiated to follow up on research carried out in the late 1990s which tracked the individual careers of creative workers in UK television through a series of questionnaires over a four year period. The subsequent analysis of this data indicated another issue of increasing importance: the ways in which the business models of ‘independent’ production companies were changing. I continued tracking these changes in the subsequent period and with the Fellowship was able both to amass further data on the foundation and growth of companies and their business models with a focus on drama production companies. I also began to explore the legislative changes which had influenced these developments.

The aim of the research was to explore approaches which might be deployed to analyse the complex nature of change in production company organisations over time. The research was carried out using various industry sources (Broadcast, PACT, BFI, IMDB, Companies House) to compile a database of company foundations and programme commissions through to 2015.  Although I had already built a database of companies, a major challenge – only partly overcome – was to extend the database to include a complete list of commissions and the firms’ economic performance over recent years.

The key finding has been that a number of firm types in TV drama production have emerged over the past twenty years with different business models. This has occurred as consolidation has taken place in the sector with increasing foreign ownership. Background research to explore the reasons why the industry was transformed after the 1980s focused on the impact of an evolving competition policy discourse and this formed the basis of the first working paper. The research on the methodological approach used to consider business model differentiation will be published in the second working paper. This approach drew on the academic inspiration afforded by CREATe and its networks and responds to the calls for a well-grounded evidence based approach to policy changes. Exploration of the implications of these findings is ongoing but an important future consideration is whether the regulatory interventions in the production sector might need to be matched with measures in distribution if the UK TV industry is to continue its export growth.

The implications of consolidation within television production are now the subject of an ESRC project being carried out at the Centre for Cultural Policy Research at the University of Glasgow on which I am co-investigator. This research includes a review of the impact of changes in ownership of production companies on the programmes they produce which was identified as a matter of public policy concern in the Fellowship.