By Admin23 February 2018No Comments

Sheona Burrow presents the CREATe project that evaluated the performance of the new IPEC Small Claims Track (introduced in 2012), for the Research Blog Series. 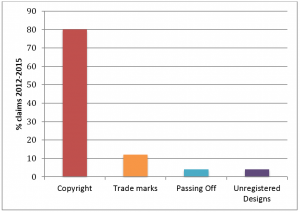 The work package Assessing the IP Small Claims Track was designed to fill a gap in empirical knowledge of intellectual property enforcement in the UK and has complemented simultaneous research by Helmers, McDonagh and others, as well as the CREATe theme on enforcement. The IP Small Claims Track was introduced in October 2012, as Create was being established, as a forum for the resolution of copyright, design and trade mark disputes valued at less than £10,000. This project aimed to evaluate the success of the introduction of the IPEC Small Claims Track.

The methodology adopted followed established methods for examining litigation activity by looking at the court files for the period starting in October 2012 and completing in December 2015. 261 case files were sampled, estimated to represent 95% of all disputes dealt with by the court during this period. Use is lower than estimated in the government Impact Assessment in 2012. A mixed methodological approach, combining ethnographic observation of court hearings and a survey of court users, was not possible because of the constraints of working with HM Courts as a gatekeeper of the data.

The key findings of the project were that the court appeared popular for copyright claims, particularly concerning online infringement of artistic works. Photographers were a large user group, bringing over 40% of claims during the sampled period. While some other businesses in the creative industries were litigants, the court was also used by non-creative business, particularly those in retail and manufacturing. The majority of court users were micro businesses or SMEs. There was also a ‘gender gap’, with the majority of court users being male. The majority of claims were under half of the permitted small claims limit, which increased to £10,000 in April 2013, the mean value being just around £3,800.

While claimants were usually successful in their claims if they went to court hearings, only 30% of claims during the period were decided by a judge. Around half of claims settled, some claims were transferred to the IPEC Multi-Track, and some claims terminated for other reasons that were unclear. A tiny minority of the 79 hearings by the specialist District Judges appointed to the IPEC Small Claims Track resulted in a published hearing. Only around half of claims were actively defended, but active defence was a variable that affected outcomes. Most copyright claimants only sought financial remedies for infringement.

The project raises questions about the enforcement of unregistered design rights, and low value trade mark and passing off claims. There was little use of the IPEC Small Claims Track to enforce these rights; more research is needed on the incidence of low value infringement of these rights, and the dispute resolution mechanisms adopted. The project also demonstrated that there was relatively low usage by creative industries. For example, in the sampled period there was one claim from a business in architecture, four claims from those in a craft occupation, and four claims from those in ‘Music, Performing and Visual Arts’. Further research would be needed to understand why the IPEC Small Claims Track does not appear to be an appropriate forum for resolution of low value disputes in these occupations. There is also scope for additional qualitative work to understand litigation behaviour and satisfaction with the court.