By Admin22 January 2018No Comments

Kicking off the theme of Creative Practice and Copyright, this review of music copyright in the digital age, for the Research Blog Series, brings together research across three related work packages. 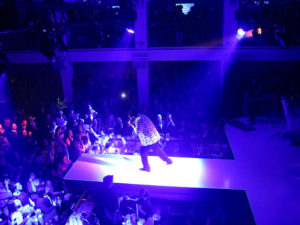 Project: Understanding the politics, culture and aesthetics of musical copyright in the digital age

Copyright appears in one of two guises. It is either the backdrop to arguments about plagiarism – about how ‘Blurred Lines’ was stolen from Marvin Gaye, or about how Donald Trump is making (allegedly) illegitimate use of Adele and others to accompany his rallies. Or copyright is seen as central to the development of the digital economy – hence, the Ian Hargreaves’s Review of Intellectual Property and Growth in 2011, and a spate of EU reforms to the copyright regime.

Copyright is viewed by many as an increasingly important driver of the modern economy and its regulation is central to the creation of the Digital Single Market. Yet, others see it as the brake which stops artists creating and uploading their compositions, and as the obstacle to digital platforms having the flexibility to curate these compositions (delayed due to the process of gaining permissions and licenses). This complex terrain is assumed to be the province of economists, business theorists and lawyers. But this is to overlook other, crucial dimensions of copyright that touch upon important cultural, aesthetic and political issues.

This is what we argue in a series of recently published papers, reporting on research funded by the CREATe progamme. Our project ‘Digitisation and the Politics of Copying in Popular Music Culture’ involved interviews with working musicians across the spectrum of popular music activity, as well as their business associates, and representative bodies. Drawing on this research, these articles challenge the approaches to copying and popular music that pitch corporate notions of piracy against creative sharing by citizens and musicians. Focusing on the culture, aesthetics and politics of copyright, we suggest the need to re-think and broaden how we treat terms such as ‘original’ and ‘copy’, and how judgements of the distinction need to be informed by political and moral values as much as by contract and IP law.

The culture of copyright
We call for a more nuanced understanding of the practices and values associated with copying in popular music culture and advocate a more critical approach to notions of ‘originality’. We consider, therefore, how copying is caught between a commercial necessity for familiar musical products that must conform to existing expectations and a copyright legislative rationale requiring original sounds with individual owners. Our article argues that there is a long history to human copying as a means of acquiring knowledge and skills, and that this leads to contradictory mix of creative musical practices, commercial imperatives and copyright regulations. The result is a series of unavoidable tensions around originality and copying that are a central characteristic of cultural production.

The aesthetics of copyright
One area of musical work that has been closely tied to the particularities of copyright and its capacity to affect musical creativity is the practice of sampling. The ability to sample the work of others and to incorporate it onto another work is often taken as a paradigm of the possibilities of digital culture and the problems confronted by the copyright regime. In the second of our articles, we argue for a view of music production – and popular music production in particular – that better accounts for sampling than has historically been the case by viewing it as a continuum of activity. Weighing evidence from interviews with musical practitioners against the legal and industry frameworks we illustrate, first, how sampling has been legally differentiated from other types of musical copying. Secondly we show that, despite this, comparable ethical codes exist within and across musical methods, making sampling just one example of a spectrum of cognate activities. Thirdly, the ubiquity of digital technology within popular music production, and the resultant flatter relationship between sampling and other musical techniques, means that the sampling aesthetic has not been effectively integrated into musical practice and into its legal and industrial contexts. This ‘post-sampling’ reality places sampling and other musical techniques along a spectrum, in practical and ethical terms. Musicians would be better served by sampling being treated as part of the overall musical palette, allowing both scholars and the law to concentrate on ideologies of practice across the tools that musicians use rather than between different specific techniques.

The politics of copyright
The culture and aesthetics of musical copying (and, by extension, copyright) are, of course, difficult to disentangle from their broader political context. Copyright matters here, not just for the distribution of rewards and resources in the creative industries, but as a site within which established political concerns – collective and individual interests and identities – are articulated and negotiated, and within which notions of ‘originality’, ‘creativity’ and ‘copying’ are politically established. Set against the background of the increasing economic value attributed to the creative industries, the impact of digitalization on them, and the European Union’s Digital Single Market strategy, we show how copyright policy, and the underlying assumptions about ‘copying’ and ‘creativity’, express unexamined political values and ideologies. Drawing on a close reading of policy statements, official reports, court cases, and also on our series of interviews with musicians and stakeholders, we explore the multiple political aspects of copyright, showing how copyright policy operates to privilege particular interests and practices, and to acknowledge only specific forms of creative endeavour.

Copyright is rarely far from the surface of musical creation and its monetization. The news is replete with instances of legal contention over creative activity. Drake, for instance, has recently won a case over fair use in sampling, with Justin Timberlake and Will.i.am dragged further into a plagiarism dispute when a federal judge refused to dismiss the case. Songwriting legend Burt Bacharach weighed in on the subject by calling for a change in the law. Likewise, with Brexit looming large on the legislative horizon and EU proposals for copyright reform under discussion that may affect the status of platforms like YouTube, the UK’s collection society – PRS for Music – is obviously interested in the potential impact of the value of musical works. Elsewhere, South Africa is investigating the potential for adjusting its copyright regime to better account for digital production and dissemination. In short, copyright remains a central plank of musical creativity and value, and although its provisions are increasingly complex, and in a state of flux, there are still gaps in our understanding of the underlying relationship between the complex frameworks of copyright policy, its legal enactment and the business and cultural practices on the ground of musical creativity. It is our hope that this research will begin to illuminate some of these crucial but hitherto under examined links.

For more information, see the authors’ papers Copying, copyright and originality: imitation, transformation and popular musicians, in the European Journal of Cultural Studies, 2017, Vol. 20(4) 363–380; The sampling continuum: musical aesthetics and ethics in the age of digital production, in the Journal for Cultural Research, 2017, Vol, 21(3) 223-240; Copy Rights: The Politics of Copying and Creativity, in Political Studies, 2017, e publication ahead of print.

This post has also been published on the London School of Economics blog.