Kris Erickson discusses CREATe research on understanding the value of the copyright public domain, for the Research Blog Series. 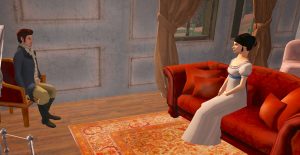 Still from ‘Ever, Jane,’ a game using public domain material

In addition, the project involved collaboration by Co-Investigators Dinusha Mendis (Bournemouth University), Paul Heald (University of Illinois) and Fabian Homberg (University of Southampton). The project employed a number of CREATe PhD student research assistants, who assisted with interviewing SMEs about their use of public domain materials and gathering data about the use of public domain imagery on Wikipedia.

What did your research aim to do?
Copyright policy seeks to balance the benefits of intellectual property protection with the benefits of public access to creative works. Despite more than two decades of scholarship on the concept of the ‘public domain’, the economic benefits of limitations to copyright remain under-explored. This project was designed to further empirical understanding of the value represented by the copyright public domain, by analysing its use in specific contexts. The two-year study focused on three specific contexts (use cases) for public domain works: uptake by creative SMEs involved in digital adaptation, Integration in creative projects pitched on the crowdfunding platform Kickstarter, and use by editors on the global encyclopaedia resource Wikipedia.

The project involved significant opportunity for knowledge exchange: the research team worked closely with colleagues at the UK Intellectual Property Office. Dr Erickson was seconded to the IPO in the summer of 2014 where he worked with colleagues Nicola Searle, Pippa Hall and Tony Clayton in the Economics, Research and Evidence unit and presented preliminary findings from the data collection phase of the project.

How did you do it?
The first challenge was defining what the researchers meant by ‘public domain’. We settled on a definition which included works that entered the public domain because their term of copyright protection expired, works that pre-dated or failed to meet the threshold for copyright protection in the first place, and works that were bequeathed to the public domain by their creators. We did not include selective uses permitted by exceptions to copyright in our analysis, preferring to focus on entire works available to all (including commercial users).

Next we developed a set of empirical strategies to investigate how public domain works were used in specific, narrowly selected markets. We used semi-structured interviews to gather information from managers of 25 UK creative enterprises. To investigate the use of public domain materials on Kickstarter, we employed computer-assisted content analysis to first locate a sample of all projects pitched in Q1 2014, and then followed up with human coders to add variables about the intellectual property status of creations. Finally, we analysed a unique database of notable authors’ birth- and death-dates to compare the performance of Wikipedia pages bearing images of those authors. This involved using research assistants to merge multiple sources of data, including page visitorship and characteristics of images hosted on Wikimedia Commons.

Still from ‘Ever, Jane’, a massively multiplayer online (MMO) game in development by Three Turn Productions. The game benefits from the public domain status of the collected works of Jane Austen; players assume a role within the fictional universe and write new fan material without requiring permission from a rightsholder.

What are your key findings?
In a published report for the Intellectual Property Office we present a legal overview of the status of public domain works and the results of the three empirical studies. The most significant finds are as follows:

• Certain creative business models benefit from availability of public domain works, particularly those involved in work-for-hire with public bodies and those involved in niche, digital transmedia projects.
• Public domain status enables certain firms to benefit from ‘private-collective innovation’ (Von Hippel & Von Krogh, 2003). Engaged fan communities can create derivative works without transaction costs, so firms can position themselves as curators and mediators of fan creativity.
• On Kickstarter, entrepreneurs who re-use public domain materials benefit from a significant increase in success compared to projects that are mainly ‘original’. Remixing public domain and third-party copyright works was a successful strategy. Results were obtained through observation of 1,993 product pitches and statistical analysis of their outcomes.
• The availability of public domain imagery (photographs, illustrations) contributes USD $232 million in surplus annually across the entire English-language Wikipedia. This was calculated by analyzing the increase in usage for Wikipedia pages where images are present, and deriving commercial equivalent values for the uplift in visitorship.

What impact has your work had so far/what impact do you anticipate it will have?

The research was widely cited, including by Fortune Magazine, WIPO Magazine, The Conversation, Phys.org, Wikimedia Foundation and Netzpolitik.org. CREATe was invited to present findings at the World Intellectual Property Organization, a specialist agency of the United Nations in Geneva.

In 2014-2015 MEP Julia Reda was the rapporteur of the European Parliament leading a review of Directive 2001/29/EC (Copyright Directive). Her team used the findings, notably the quantitative evidence that the public domain has economic benefits and a public interest purpose, to argue for specific reforms to copyright which would enlarge the public domain. In a speech delivered in the European Parliament on 3rd March 2015, titled ‘Towards a new legislation on Intellectual Property in the digital single market’, MEP Reda directly cited the CREATe research while arguing for political action to preserve and enlarge the digital public domain in Europe. Referring to empirical evidence on the consumer surplus represented by public domain images on Wikipedia, she stated:

‘What these authors found was that […]if we don’t have a public domain, projects like Wikipedia, which are in the public interest, would not even be possible to start, because the commercial investment that would be needed to clear the rights to images would be a huge obstacle to any commercial business going in this direction.’ (MEP Julia Reda, 3 March, 2015).

Despite controversy and opposition from lobby groups, Reda’s final report adopted by the European Parliament on 9 July 2015 retained specific reference to the need to identify, support and preserve the public domain in Article 31, which:

Challenges encountered/Lessons learned
The research team learned significantly from this project, and those lessons will inform future research. The choice to parse the larger research question ‘What is the value of the public domain?’ into smaller, more manageable questions helped feasibility of the project. Text and data mining from online market platforms (Kickstarter, Amazon) has proved to be a powerful tool and capable of generating new insights. Interdisciplinary contact between Economics and Law proved to be a challenge: how to simplify multi-jurisdictional and culturally-specific legal cultures to measurable variables that can be observed empirically?

Are there additional/new research questions still to be answered in this area?
Accounts of IP and innovation in national GDP reporting have tended to focus on ‘copyright industries’, that is, the assumed role of private rights in generating innovation. However, our research shows that equal attention must be paid to the economic contribution of open and available inputs to the innovation process. Certainly, further research should explore and refine methods of accounting for ways that lack of IP protection can have impacts, both positive and negative, for innovation and society. Specific themes for research might include interoperability, data portability, reversion of rights, creative commons and other voluntary licensing arrangements, and may extend to ‘tolerated uses’ such as fandom, user-generated remix etc.

How has your association with CREATe helped to take things forward?
This research project made full use of resources available in CREATe, both human and technical. The PhD student researchers involved in this project included Sheona Burrow, Victoria Stobo, Megan Blakely and Kenny Barr. CREATe fellow Ruth Towse also contributed to the research as an expert reviewer. The excitement and intellectual curiosity of the extended team had a notable effect on the volume and quality of work produced by the overall project.

For more information see the project resource page and the paper published by Heald, Erickson, Kretschmer