By Admin22 November 2017No Comments

As part of the Research Blog Series, Xiaobai Shen and Robin Williams from the University of Edinburgh present their work on business models in China’s online music, literature and film industries. 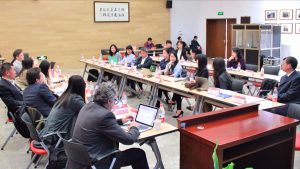 Project Name: Convergence or differentiation in IP protection? A case study of new models for digital film, music and e-fiction production and distribution in China

What did your research aim to do?
The project investigated the emergence of new production, distribution and business models in China’s online music, literature and film industries. It aimed to gain a better understanding of the current play in China in comparison with the state of the similar cultural industries in the UK and Europe. It focused in particular on the recent mergers and reconfigurations of these Chinese industries, that has arisen since the large internet giants, Baidu, Alibaba and Tencent, engaged in these industries. It examines the consequences for the evolution of new online services and the development of these industries

How did you do it?
Our research methods are mainly qualitative, which includes 57 semi-structured personal interviews coupled with collection and analysis of policy documents and academic and media papers in the relevant areas. The analytical framework is highly interdisciplinary, combining perspectives from science and technology studies (STS), Intellectual property law, and international business studies. Contemporary ethnographic is accompanied by mapping of the sector(s), and a brief historical survey of these sectors to understand contextual features shaping developments in China and highlighting differences from the West.

What are your key findings?
While some have suggested that the prevalence of piracy in China would hold back the development of creative industries and online creative services our the empirical evidence collected from our research offers a very different picture

1) China has successfully and rapidly developed its cultural industries, in particular, in the music sector. There has been a proliferation of  innovative services offered by  online platforms who are exploring a complex array of new business and service models

2) The copyright regime, which was imported from the West, and initially had little impact due to the lack of cultural roots in China’s history, is currently being embraced by the Chinese government and latterly by large corporations in the industries.

However, our analyses call in question arguments about the imputed lack of compatibility between IP and the Chinese setting. We argue that copyright regime, a manufactured artefact, is a powerful political and business tool for powerful players in China and the world. Effective utilisation of the tool – copyright protection – is the key factor which has contributed to today’s success in China’s online creative industries.

We further argue that China is en route to leading the development of creative industries and beyond through its online digital service platforms and a distinctive industrial outlet from that in the West. The dominance of Internet giants allows multi-level integrations of the services between creative cultural industries with other businesses platforms in pursuing the diverse values of culture, including commercial values.

What impact has your work had so far/what impact do you anticipate it will have?
Our interactions with key players in China during the research project attracted considerable interest from the large internet/social media platforms, the government and the media. Our Beijing workshop was reported by China Intellectual Property News and the websites of an array of organisations, including National Copyright Administration of the PRC and China IPR network (www.iprchn.com). The close contacts that we have created with the key players in the industries, legal sector and the government have established an importnt channel for further research and for assisting UK industrial players to connect with Chinese counterparts and understand the business environment in China.

Are there additional/new research questions still to be answered in this area?
There is an urgent need for further research to track and study in greater detail  the important developments unfold in the digital creative industries in China, which may well emerge to become a world- leader in the digital service innovation. In addition the Chinese case offers crucial evidence to broaden and deepen our conceptual understanding of the relationship between copyright and cultural development in the digital age.

How has your association with CREATe helped to take things forward?
The access to the CREATe network and the series of events it supported during the time of the project provided an opportunity for bringing diverse intellectual perspectives (business, legal, sociological) as well as a context allowing comparative insights between developments in China and the UK (and the West in general).