Guest post by Marcel Kohpeiß, postgraduate student on the LLM in Intellectual Property and the Digital Economy. 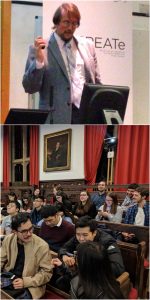 In the second of CREATe’s Autumn 2017 Public Lectures, Prof. Paul Heald (University of Illinois) discussed the problem of disappearing books from general availability, and if reversion rights are a possible solution for the issue. The lecture took place on the 8th of November in Glasgow University’s Arts and Humanities lecture theatre with Prof. Andreas Rahmatian (University of Glasgow) as chair.

Paul presented the methodology and findings of his recent study, which addressed the effect of US reversion rights on book availability on the US market. For this purpose, he briefly presented the problem of ‘disappearing books’. This term designates a current process on the book market, because of which more and more books disappear, due to long copyright durations. A graphic displayed to explain the phenomenon showed that only newer literary works could be found on Amazon in greater quantity. Older books however, which do not fall in to the public domain and are still subject to copyright, only exist in smaller quantity. This leads to a greater quantity of books from that period not being available and thereby disappearing from the market. The disappearance of books is problematic even in an economical view and could be viewed as a market failure, as it leads to large proportion of books not being available for monetary exploitation and not being available as a source of inspiration to others.

The current legal situation in the US is defined by two statutory reversion rights deriving from 17 US Code § 203 and 17 US Code § 304. These rights enable reversion of copyrights after 56 years of transfer for works published between 1950 and 1977 and after 35 years of publishing for works published after 1978. Paul explained his discovery of the so-called ‘Rosetta Effect’. This effect occurred after a district court decision (Random House, Inc. v. Rosetta Books LLC) which held, that agreements, granting all rights in ‘book form’ didn’t include publishing rights for eBooks. This led to the vast licensing of eBook publication rights of books that have already been published as printed versions and thus to a republication of elder literary works as pure ‘eBook versions’, by smaller, independent publishers.

Paul addressed the question, what is the overall effect of US reversion rights on the availability of books? To answer this, he presented an analysis based on two ‘NYT bestseller books’ data sets and one data set of more general books, which were reviewed by the NYT. The data sets were split up into groups eligible for reversion and not eligible for reversion under both relevant rules. All three of the data sets show evidence that supports the impression, that reversion rights have a positive effect on the general availability of books. The 35-year reversion rule seems to be particularly effective, whereas the 56-year reversion rule is shown to be less so, because of the overall duration difference of 21 years, lesser popularity of the books and difficulties to identify heirs of copyrights.

As a conclusion, Paul hinted that reversion rights therefore might indeed contribute to a solution against the disappearance of books. Furthermore, he pointed out, that an introduction of reversion rights would not only be more likely and easier than a change to the duration of copyright, but also possible under the Berne Convention and should therefore be considered by member states as a possible solution to prevent disappearance of literary works.

Paul’s presentation was followed by a lively discussion about the result of his analysis and weather the problem of disappearing books could be classified as a market failure or not.

Slides from the event are available here: