The CREATe film Going for a Song from Copyright User, has been shortlisted for the Innovation Award in the Arts and Humanities Research Council’s prestigious 2017 Research in Film Awards. Going for a Song tells the story of Tina and Ben, a music composer and lyricist who create an original song and discuss how to market it. Exploring how UK copyright law regulates different aspects of the journey of a song, from creation to distribution, it was was co-directed, written and produced by Bartolomeo Meletti and Ruth Towse.

Bartolomeo Meletti said:”Going for a Song is the result of an innovative production process. Instead of composing the music after finishing the animation (as we usually do), we did it the other way round: after writing the script, we produced the track and then developed the video upon the music. This is why we are particularly delighted to have been nominated for the AHRC Innovation Award: it is a prestigious recognition of the innovative techniques and approaches we adopted to make research more accessible and engaging to communities beyond academia.”

Hundreds of films were submitted for the Awards and the overall winner for each category will be announced in a ceremony at the home of BAFTA in London on 9 November. Each winner will receive £2,000 towards their filmmaking. Launched in 2015, the Research in Film Awards celebrate short films, up to 30 minutes long, that have been made about the influence of the arts and humanities on our lives. There are five categories in total with four aimed at the research community and one open to the public. 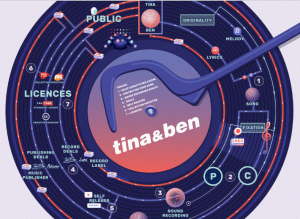 Head of Communications at the Arts and Humanities Research Council Mike Collins said: “The standard of filmmaking in this year’s Research in Film Awards has been exceptionally high and the range of themes covered span the whole breadth of arts and humanities subjects.

“The quality of the shortlisted films further demonstrates the endless potential of using film as a way to communicate and engage people with academic research. Above all, the shortlist showcases the art of filmmaking as a way of helping us to understand the world that we live in today.”

A team of judges watched the longlisted films in each of the categories to select the shortlist and ultimately the winner. Key criteria included looking at how the filmmakers came up with creative ways of telling stories – either factual or fictional – on camera that capture the importance of arts and humanities research to all of our lives.

Judges for the 2017 Research in Film Awards include Richard Davidson-Houston of Channel 4 Television, Lindsay Mackie Co-founder of Film Club and Matthew Reisz from Times Higher Education.

The winning films will be shared on the Arts and Humanities Research Council website and YouTube channel. On 9 November you’ll be able to follow the fortunes of the shortlisted films on Twitter via the hashtag #RIFA2017. Going for a Song can be viewed on Copyright User.