By Bartolomeo Meletti31 July 2017No Comments 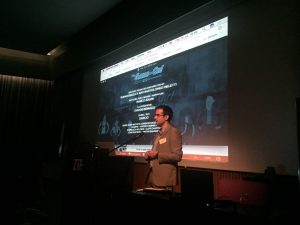 The research group is a collaboration between legal scholars, philosophers and scholars from art history, art sciences, book studies, comparative literature, German literature, media studies, popular music and sociology. Its overarching aim is to develop proposals balancing the interests of those affected by copying practices, which might influence future legislation and facilitate the formation of inter-subjective moral standards for distinguishing between legitimate and illegitimate forms of copying.

The day started with a fascinating presentation by Professor Thomas Dreier on ‘The Ethics of Citation and Partial Copying’. After distinguishing between citation (or quotation) where purpose matters, and partial copying, where partiality matters, Professor Dreier explained that given the exclusive nature of copyright, we need to work back to create some spaces for freedom. He compared how citation and partial copying are treated differently in Continental systems found in Germany or France, for example, and Anglo-Saxon models such as the UK or the US. With regard to partial copying, while Anglo-Saxon systems regard the original work as a whole and ask whether a ‘substantial part’ has been taken, Continental jurisdictions consider whether the part that has been taken would constitute a copyright work on its own. Professor Dreier’s talk ended by presenting three possibilities to regulate partial copying: i) it should always be authorised; ii) it should be authorised but with payment; or iii) licensing and markets should prevail, as in Anglo-Saxon models. Depending on how one system deals with these possibilities, different moral outcomes may derive.

During the evening session, ‘The Adventure of the Girl with the Light Blue Hair’ – the first episode of The Game is On! series produced by Professor Ronan Deazley and myself, and winner of the 2015 AHRC Innovation in Film award – was presented as an illustrative example of the different forms of legitimate copying that do not require permission under UK copyright law. 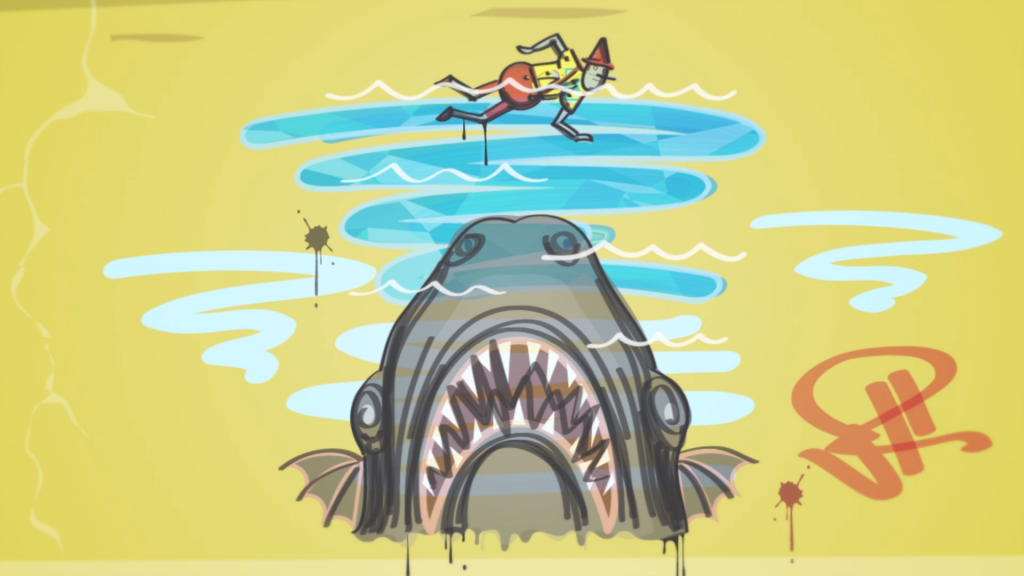 The Adventure of the Girl with the Light Blue Hair. Original illustration by Davide Bonazzi.

‘The Adventure of the Girl with the Light Blue Hair’ is also an educational tool, suitable to be used in the classroom as a springboard for exploring key principles and ideas underpinning copyright, creativity and the limits of lawful appropriation and reuse. It is accompanied by various Case Files, supplementary educational materials (below the video) that offer points of discussion about copyright for teachers and students. After playing the short film, I showed some of the instances of lawful copying we used as introductions to the Case Files. These included i) the first frame of the video showing a red bus travelling across Westminster bridge on a black and white background (used to introduce the idea-expression dichotomy and propose points of discussion around the Temple Island case in Case File #1); ii) the graffiti of the monster eating the toy, based on two out-of-copyright works: one of Carlo Chiostri’s illustrations of Carlo Collodi’s Pinocchio and Francisco Goya’s Saturn Devouring His Son (used to discuss copyright duration in Case File #2); and iii) the graffiti of the shark attacking the swimming toy, inspired by another Chiostri’s illustration (in the public domain) and the artwork from the Jaws movie poster (still in copyright), which we were able to use under the recently introduced parody exception (Case File #5).

While in these cases our copying was ‘educational’, meaning that we decided to copy these works with a specific educational goal in mind, in other instances our copying was purely creative: we reused, copied or took inspiration from other works because we thought it would add creative value to our short film. For example, the primary source of inspiration for the graffiti depicting the toy hanging from a tree was Carlo Collodi’s ‘The Adventures of Pinocchio’. In the original story, Pinocchio gets hanged by the fox and the cat and dies, which is how Collodi wanted the story to end in its first, serialised version published in ‘Il Giornale per i bambini’ (The Newspaper for Children) in 1881. However, following the upset reaction of its young audience, the publisher persuaded Collodi to continue the story. This is how the Fairy with Turquoise Hair (the Blue Fairy in the Disney version) came in the story: she was introduced by Collodi to rescue Pinocchio and eventually transform him into a real boy.

Starting from this curiosity, we produced our picture by combining Chiostri’s illustration of Pinocchio hanging from the tree with various other references, including Banksy’s Yellow Lines Flower Painter, Vermeer’s Girl with a Pearl Earring, Disney’s Pinocchio, and one of the photographs of the (in)famous Cottingley Fairies. 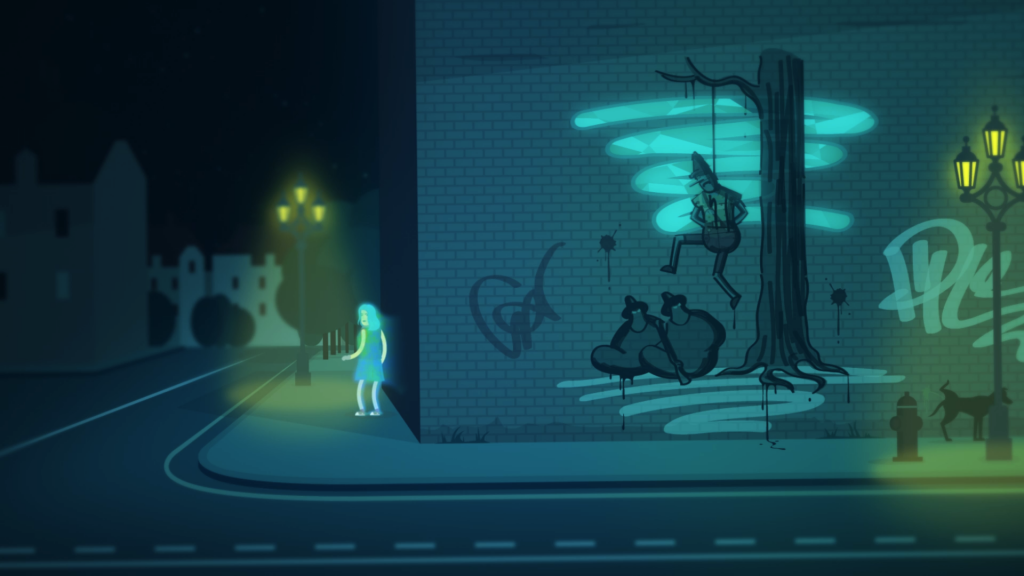 The Adventure of the Girl with the Light Blue Hair. Original illustration by Davide Bonazzi.

The creative process behind The Adventure of the Girl with the Light Blue Hair is explained in the CREATe working paper Copying, Creativity and Copyright, which makes the case for understanding copying as a positive phenomenon in helping us learn and innovate, develop and engage with others. When Ronan and I finished the paper, we realised that a much shorter version of it could work as script for a short video. So, we turned an over 5000-word paper into a 300-word script, and produced the video ‘Copying & Creativity’, which was previewed at the end of my presentation in Bielefeld. ‘Copying & Creativity’ explores the complex relationship between copying and creativity through the eyes of a young art student, and will be publicly launched together with the new design of CopyrightUser.org, which we are currently finalising. 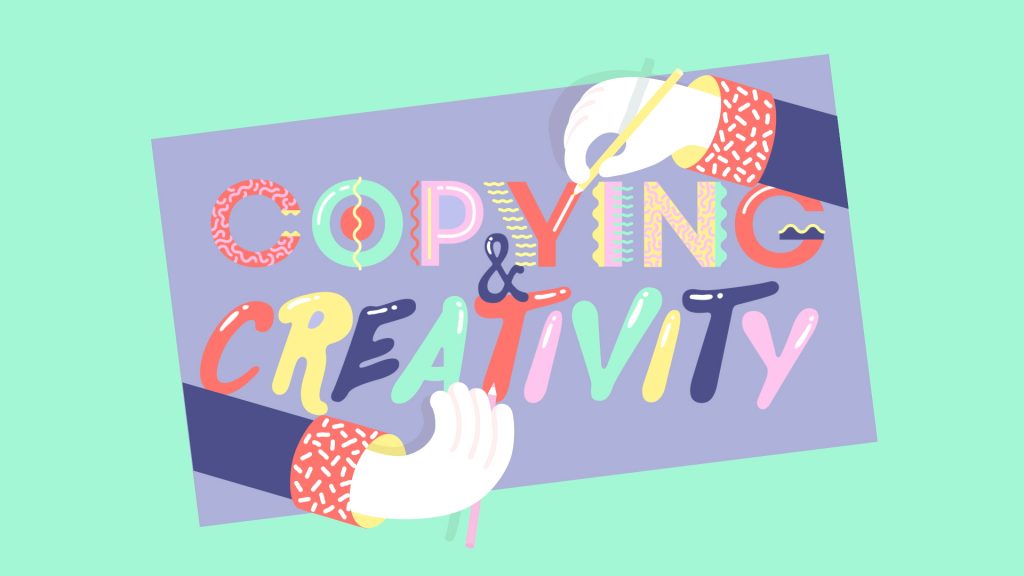 This story of a short film, which inspired a paper, which inspired another short film, was well received by the research group The Ethics of Copying, composed of international scholars who are keen to collaborate on interdisciplinary projects investigating the ethical dimensions of copying. For me it was a great occasion to present and discuss with the group some of the resources we have produced for CopyrightUser.org, with a view to helping creators understand the creative opportunities within copyright law, make informed decisions when creating new work and meaningfully participate in the policy debates aimed at striking a just balance of interests for those affected by copying practices.