By Joy Davidson23 November 2016No Comments 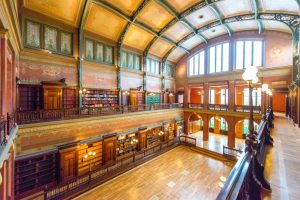 Bibliothèque Solvay in Brussels, venue for the launch of the European Guild of Research Intensive Universities (image: Edificio, Belgium)

CREATe director Martin Kretschmer spoke at the Opening Symposium of the newly formed Guild of Research Intensive Universities: Overcoming Boundaries: Open Science and Open Innovation.  In discussion with academics from the universities of Göttingen, Oslo, Tartu, Tübingen, Warwick and the European Commission’s Head of Cabinet in DG Research and Innovation, he argued that the natural incentives of researchers are stacked against Open Science, identifying two groups of factors:

(1) The control over the standard metrics that govern academic appointments and careers (rankings, impact factors, citations). These are mostly drawn from closed environments, managed by science publishers through several layers of protection: ownership of journals and databases, contracts, access restrictions (TPM).

(2) The norms and conventions that govern different disciplines. These diverge for the humanities (where aspirations of authorial control still dominate), for the social sciences (where exclusive control of data is seen as giving a competitive advantage), and the physical and biological sciences (where marking a scientific advance as early as possible in public may offer a reputational route). 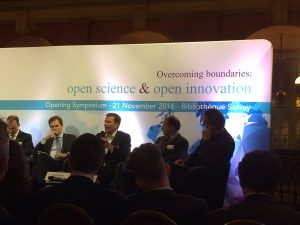 Recent interventions at EU level, prescribing cloud deposits of data and open access dissemination of outputs as a condition of research funding awards are important levers but need to be understood in the context of a complex scientific incentive system. The experience with digital data repositories over the last two decades shows that the terms of grants are difficult to monitor and enforce.

Drawing on the experience of CREATe’s Copyright Evidence Wiki (using the Wikimedia platform) and CREATe’s working paper series using CERN’s Zenodo repository, rather than venture capital backed initiatives such as SSRN (now owned by Elsevier) or ResearchGate, Kretschmer explored the possibility of developing new indicators and metrics for Open Science that could replace journal impact factors, and encourage researchers to open up research process and findings.