The creative economy in question

The creative economy in question

By Joy Davidson5 October 2016No Comments 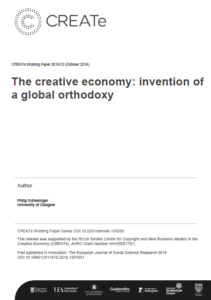 The ‘creative economy’ and its workings have been at the heart of our mission, writes CREATe Deputy Director, Philip Schlesinger. Over the past four years, this has given the Centre’s work both a coherent focus and, at the same time, it has offered considerable scope to undertake research into legal aspects of copyright, as well as the economics, psychology, and sociology of a wide range of cultural organisations and practices, not to speak of intervening in debate on some pressing policy issues. Anyone who reads across our Working Paper series will know that CREATe has been home to a diversity of approaches and that several disciplines have been mobilised for the analyses presented during the Centre’s life.

In this new Working Paper, Philip Schlesinger describes the origins of the idea of the creative economy, to show its global influence and also to demonstrate how framing the terms of discourse in a particular way leads to their routine embedding in organisations and institutions and everyday practices.

For practical purposes, though, our focus on the creative economy has been bracketed and to a great extent taken for granted. However, like all potent terms it comes from somewhere and has practical effects in setting the priorities and boundaries of research. From time time to time, I have underlined this, because a research centre such as ours is committed to reflexivity concerning the underlying conditions of its conceptual and empirical work. Periodically, therefore, I have raised questions about the role of our kind of research and its relations to policy-making, occasionally speaking on this theme at CREATe’s conferences. I have also have blogged to that effect on this website as well as elsewhere

CREATe, then, is positioned in relation to what what has become one of the central animating ideas of current cultural policy. But more than that, the idea of the creative economy has become so taken for granted that for many it simply hides in the light – or, and this amounts to the same thing – it is largely unquestioned.

In this Working Paper, therefore, I have sought to describe the origins of the idea of the creative economy, to show its global influence and also to demonstrate how framing the terms of discourse in a particular way leads to their routine embedding in organisations and institutions and everyday practices. In doing so, as will be seen from the literature cited, I am certainly not alone in raising critical questions. It will also be clear to those who choose to read on that, together with my colleagues at the Centre for Cultural Policy Research, I have looked closely in recent empirical analyses at the institutional working out of broad policy prescriptions deriving from the ‘creative turn’.

As readers will also see, an outcome of current policy orientations is that a powerful orthodoxy is presently dominant in the academic field. That is so because, in a nutshell, the discussion of culture by government and research bodies in the UK (and elsewhere) has been dominated unremittingly by economic concerns. This take on the value of culture has occurred for understandable reasons. Most importantly, it is due to the quest for ways of making national economies more competitive in the context of global trade and also (and this is not to be underestimated) in order to have a good official story to tell others and ourselves about the success of the ‘national culture’. In many places, though, political boundaries and the scope of collective identities – not least in the European context in which I write – are now in acute question. The potency of culture escapes the trammels of economic logic. Consequently, it has become increasingly clear to me that the repair work that the creative economy idea can perform for the state and nation in increasingly fraught socio-political conditions is manifestly threadbare and that this paucity will provoke us to think afresh. That is an invitation to you to read on and let me know if you agree or disagree.