The career-building strategies of individual creators: A meta-analysis of qualitative research funded by CREATe

The career-building strategies of individual creators: A meta-analysis of qualitative research funded by CREATe

By Joy Davidson21 June 2016No Comments 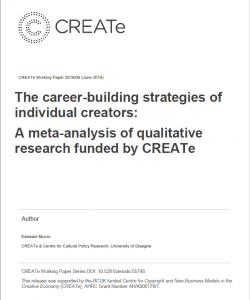 CREATe is delighted to announce the release of a new working paper authored by Ealasaid Munro, Centre for Cultural Policy Research, University of Glasgow. The working paper outlines the findings of the Voices of CREATe project which aimed to provide a comprehensive picture of CREATe’s research into the activities of individual creators. A dedicated panel session will explore these findings at the CREATe Festival later this week. More details have been provided by Ealasaid  in her post.

In late 2015, I was asked by Martin Kretschmer and Philip Schlesinger to lead a new CREATe-funded work package – titled ‘Voices of CREATe’ – that specifically sought to draw out the ‘voices’ of individual creators from across the seven interrelated themes addressed by the consortium.

Via a qualitative meta-analysis of both published material and unpublished primary data supplied by some of the work package leaders, I have constructed a comprehensive picture of CREATe’s research into the activities of individual creators. This working paper forms one of the outputs of Voices of CREATe, and has been released to coincide with the CREATe Festival, to be held at RSA House in London, on June 24th.

The key themes that have come out of an examination of the ‘voices’ of individual creators are: first, that despite 20 years of government intervention in the creative economy, that creative labour remains – in the main – extremely precarious. Second, it is clear that from the perspective of individual creators, the copyright framework – as it currently stands – neither incentivises creativity nor ensures adequate protection in cases of infringement. Third, the disruptive effects of technological change have been felt far more keenly in some sectors than others.

A panel of academics and creative practitioners will respond to the findings of Voices of CREATe at the CREATe festival. The panel will feature: