Fashion as Urban Scene? Like Berlin techno or ‘Madchester’?

Fashion as Urban Scene? Like Berlin techno or ‘Madchester’?

Angela McRobbie, Professor of Communications at Goldsmiths, University of London reflects on the changing shape of the Fashion industry. 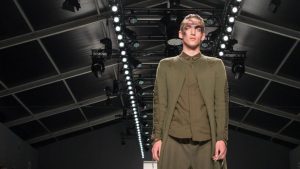 Fashion, as we know, is almost synonymous with the capriciousness of taste, with ephemerality, with an ever-accelerating pace of products and items which can now be on the rails to suit customer needs, even when the weather does not correspond with the calendar of collections traditionally tied to the ‘seasons’. Not long ago a cold summer or a warm winter meant significant losses, this is no longer unsurmountable. The vast expansion of the infrastructure of production, on a global basis, with new locations for small and large factory manufacture opening up on a weekly basis, from Vietnam to Cambodia, from Turkey to Morocco, means that the sheer capacity correlates also with a speeded-up idea of change and ‘newness’ now signalled by upmarket labels as mid-season ranges. At the lower end of the market the new temporality of fast fashion brings cheap copies of haute couture looks to (mostly) young consumers thanks to fine-tuned production, distribution and retail processes such as those developed by Zara and H&M, with a lead time of three weeks from the ‘runway’ to the high street store. Underpinning all of these significant transformations of fashion’s consumer culture is the role of IT, social media, rapid transport and distribution and of course the exponential growth of e-commerce.

“Designers with creativity and recognisable handwriting are the industry’s only asset for being successful in a highly competitive market. Don’t make them leave the country by ignoring them”

There is also a significant shift in the balance of power held by the fashion media. The idea of there being a few ‘fashion bibles’ such as Vogue magazine, and a few dozen serious fashion journalists writing for the quality press worldwide, has in the last 5 years been shattered by new forms of fashion writing especially blogging disrupting the rather cosy corporate field of mainstream fashion journalism. The most significant interloper, the businessoffashion.com ironically has financial investment from LVMH which permits an astounding increase in the volume of coverage given to the sector, with a much greater degree of seriousness attributed to the industry as a whole. (The BoF also acts as a filter of dissemination, distributing articles from the most influential newspapers and magazines across the world on a daily basis under the heading of ‘the Daily Digest’). The overall brief for the BoF is to report in great detail on what is currently happening across the industry (typically profiling new CEO appointments at major companies) and to pay particular attention to ‘emerging talent’, that is to the new generation of prize-winners as well as to those recently established ‘names’ from New York and Milan to Paris, London, and Beijing. With one or two exceptions, the core copy for BoF is brand-led and top heavy with key space given over the corporate figures who are seen as future industry leaders.

There are all sorts of consequences for the more local, regional and small city initiatives in fashion which are typically over-looked by this new top-down rather than bottom-up fashion online fashion forum. Not only is little coverage given to labour issues especially in low-paid manufacturing zones, but neither is there attention given to the groundswell of critical or alternative fashion perspectives, often associated with cities like Berlin, Montreal, Portland Oregon, and Chicago, all cities where there is a thriving overlap between fashion and music production, along with other subcultural and urban-based ventures, including vintage and upcycling activities. In addition it is in locations like these that interesting job creation schemes in fashion have been set up, designed not just to tackle high unemployment but to develop ways in which fashion can have a role in local community-building, connecting it with for example, older women whose skills can be brought back into circulation by bringing them into contact with a younger generation. In these cases fashion is not just an instrument in gentrification or in the regeneration of neighbourhoods. Rather it is something which can bring a stronger signal in neighbourhoods that girls and women’s employment and, more widely, active involvement in local matters such as schools, public parks, libraries and other facilities are important, with fashion and clothing factored in to this equation, rather than consigned to some entirely different space of consumer culture.

It was for all the above reasons that I was dismayed to find a leading article in BoF not long ago (16/12/2014) bewail the unexciting state of fashion design in Germany despite its place as the strongest economy in Europe. In her piece titled ‘Why Isn’t Germany a Bigger Fashion Player?’ the author Kate Abnett complies wholly with the BoF remit which is to look for winners, up and coming brands, and for success stories at the high end or in ‘luxury’ rather than in some of the other spaces of fashion production. She mentions for example that there are nearly 4000 fashion businesses in Berlin, and 800 or so designers working in the city, but emphasises however that to really make it in the industry (with a few exceptions such as Adidas and Escada) the talented have to leave, and look for work in New York, London or Paris. The author also says that few important fashion journalists visit Berlin Fashion Week and that all of this accounts for the success only in the ageing middle market of companies like Gerry Weber (a company that makes M&S seem like Prada). This is the kind of article which designers and policy-makers alike (such as those who have taken part in our CREATe research) will argue can only become a self-fufilling prophesy confirming the prejudices of the ‘big players’ so that even fewer magazine editors will bother to come to Berlin Fashion Week. (The BoF cites well over 1m readers). Not to mention that an article like this fails to contextualise fashion as part of the wider creative economy, so that the design schools and universities, and the support by local government work hand in hand to develop something that is not so much a competitor to the global brands but rather an environment which tries to encourage young people to set up their own enterprises while also to an extent contesting the received wisdom that fashion can only be done in a handful of cities. And an additional factor is that many of the young creatives cannot simply move countries and try to get a foot in the door in London, they may have children or others to care for, they may also have a genuine commitment to place and neighbourhood so that they want to be part of something local but economically viable, which nevertheless means being seen and recognised by professionals elsewhere.

An article like this poses questions which are absolutely key to how future developments in the creative economy can be understood. These issues are also of importance to research projects such as CREATe. For example in confirming the typically exclusive image of the industry, we have to ask the question as to how indeed can small or micro-enterprises in cities which are not part of the fashion globetrotting circuit succeed, with the odds so stacked against them? This applies to cities like Berlin but also right across Europe, from Aberdeen to Prague, from Glasgow to Kracow, where there are so many initiatives often backed by local government in conjunction with European Union programmes such as Youth In Action (now Erasmus) as well as national government schemes as part of various youth unemployment programmes. Staying in local, home cities such as Birmingham or Dundee in the UK (and elsewhere) is not just an issue about family responsibilities, it is also a more pressing issue as global cities like London become completely unaffordable for those who are not already on substantial corporate salaries. If the emerging model for success in fashion requires first of all being in London and then being one of the handful of hopefuls selected to be part, for example of the New Gen programme supported by the British Fashion Council and from there on having 2/3 years to energetically seek visibility and media coverage which in turn is what gets the ‘brand’ known so that eventually more lucrative offers come through the letterbox, then this applies to such a tiny sector of the population of fashion graduates (perhaps 20 per annum) as to at least surely invite the option for thinking about other models? High level industry professionals would possibly answer my queries by saying that there are many other entrance points for well-qualified graduates, especially as the sector does indeed expand. Such jobs exist at every level from working in a design capacity for H&M to joining the Zalando fast fashion team in Berlin, to making one’s way up through the ranks in fashion management for major retailers and so on. However this does not acknowledge a number of important factors. Training young people to degree and also to post-graduate level in what is often a ‘fine arts’ fashion approach should mean that these designers have the chance to develop their own practice especially in a wider context where ideas and innovation are understood to be key to jobs and growth in the creative sector. If this desire also coincides with a social commitment to working to improve chances for others in a small city environment, then the winner takes all model heralded by the BoF ( and supported across the sector) precludes the possibility of a wider discussion on these kinds of issues. To put it crudely, how can the chances to develop both creativity and indeed IP be available to a young person who wants to maintain their studio practice by starting their own label in a town or location which is not on the high fashion map?

With this in mind we could propose that the emphasis in CREATe on new business models, in conjunction with our ongoing qualitative research in three cities London Berlin and Milan permits not just a close up look at how tiny enterprises are coming into being in the light of the economic crisis and recession (see CREATe blog Milan) but can also show how difficult it is to sustain this small enterprise outlook when so much is nowadays dependent on brands and on names. The Berlin designer needs to build his or her own name in order to get buyers interested and thus customers into the shops. Likewise to have any chance of a collaboration with a bigger company he or she needs to be ‘known’. All the more reason then to look close up at what is entailed in working to this kind of agenda, the hours put in, the different activities undertaken, the need to move to an online sales base, the need to be part of a ‘scene’ and thus out and about and having a visibility in the clubs and bars etc. However there are at least support structures in Berlin which entail some degree of provision for workspace, for sharing equipment and for co-operation in production processes on a less competitive basis than in London. Overall more attention needs to be paid to how fashion micro-enterprises can survive and grow outside the fashion global cities, and how such cities can retain a population of young people trained in these areas and committed to creating a different kind of fashion sector. There is no reason why fashion cannot be regional, local, and distinctive to certain urban environments, like Berlin techno music, or indeed like the pop music of Liverpool, Manchester or Glasgow.