By Andrew McHugh3 June 2015No Comments 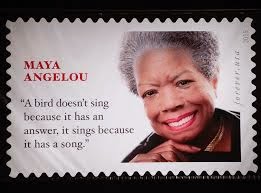 CREATe investigator Professor Mira Sundara Rajan recently appeared in popular Intellectual Property blog site The IPKat. In her guest post, entitled “A bird doesn’t sing because it has an answer”: a famous quote and the stamp of (in)authenticity, Mira discusses a fascinating recent episode whereby the US Postal Service issued a stamp intended to honour poet Maya Angelou who passed away in May last year at the age of 86. An image of Angelou on the stamp was presented alongside a quote, “A bird doesn’t sing because it has an answer, it sings because it has a song”, which appeared to be attributed to the poet. However, despite the best intentions of all involved, the quote in fact did not originate from Angelou (she’d used it often but never claimed it as her own). The words were actually authored by Joan Walsh Anglund, a children’s writer.

To read the whole story and to discover the outcomes and implications, visit The IPKat blog.