By Daithi8 April 2015No Comments 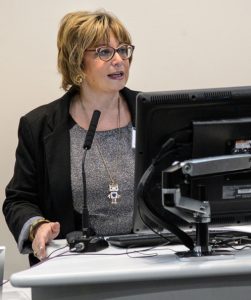 The event was organised by CREATe Deputy Director Professor Lilian Edwards – she also came up with the title of this post!

I’m just returning from a fascinating two-day conference on ‘designing smart cities’ at the University of Strathclyde, chaired by Prof. Lilian Edwards (who is responsible for the title of this post) and supported by CREATe, Horizon, and Glasgow City Council.

I particularly enjoyed this event.  I have an on-off academic interest in the interactions between law and the city (which brings in geography and architecture) (seen most obviously in my ‘virtual walls’ article), and further personal interests in transportation and in modernist architecture.  And, of course, in both domains, “technology”.  Glasgow has received Government funding after a competition: see Future City Glasgow, and so was an ideal location.

There are various plans for audio, articles and the like; these are just a few quick first impressions.  No offence to those omitted – my note taking varied across the two days, especially in and around my own contributions.  (I was there to speak on the sharing economy, which is work at an early stage, and leading me into interesting place – I had a lively lunchtime conversation about English vs London vs Scottish taxi and private hire licensing, on which I could bore for, well, Scotland/London/England…).

Richard Bellingham directs Strathclyde’s Institute for Future Cities, and is involved with the new MSc Global Sustainable Cities.  He was introducing the theme, highlighting that a majority of the world’s population will live in cities, which to be successful will need to be equitable, distinctive, and delightful.  There are drivers for change, which include resources, the ongoing recession, and changes in business processes.  He gave a range of examples of smart city projects, including analysis with multiple datasets.

My former Edinburgh colleague Judith Rauhofer reminded us that there’s always a good reason why the use of a new service makes sense, even when privacy lawyers potentially play the role of  party poopers – one can be tempted to jump into the smart city, or the Internet of things, out of convenience, lack of alternatives (e.g. if smart TVs become the norm and non-smart TVs fade from the market), economic interest, and the public interest (altruism?).  Yet, we see the continued gathering of information, including location (e.g.  eCall – for all new cars – sends out beacon to emergency services – sounds great but), behaviour, as technology becomes  ‘invisible’, and in particular physiological – e.g. FitBit dietary apps, even the smart vibrator.

David Murakami Wood, once of Newcastle but now at Queen’s University in Canada, gave a keynote address and also participated in a panel.  Unfortunately I missed the start of the keynote, but was able to catch much of it, including his distinction between three uses or approaches (rational spatial planning in the European style, technology as a driver in US approaches, and discourses of modernisation and nationalism e.g. India.  He wry noted how smart city debates have become a vehicle for another round of ideal cities, although this time the corporate involvement is particular significant.  Amusingly, the ISO is already on the case with an attempt to standardise what a smart city is, with 46 core and 56 supporting indicators.  (More on David’s contributions in the note below).

Other issues discussed included CCTV, the position of Singapore, transition towns, and a barnstorming and much-anticipated presentation on driverless cars by engineer Prof. John Miles.

We had a neat wrap-up session (with eloquent people, and me), and I made two general points as part of this final panel.

The first is how some of the debates and experiences from the early period of the commercial Internet (1995-2000) still have value.  The conference included critiques of terra nullis portrayals (Rob Kitchin, Ayona Datta), a thorough investigation of the role of intermediaries and brokers (Alison Powell), a call for open platforms and to be wary of company towns and a drive towards ambient government (David Murakami Wood), a need to interrogate algorithms and data (Rob Kitchin), and bubbling away, how to handle questions of privacy and consent (Judith Rauhofer and Derek MacAuley).  All of these things, to some extent, were up for debate as lawmakers ‘met’ the Internet, some for the first time.

The second was the degree to which questions of subsidiarity shone through, especially in the sessions on energy.  For instance, Francesco Sindico wondered what role cities should be playing in global debates (and negotiations) on climate change, characterised as they have been so far by traditional negotiations between sovereign states, while others on his panel considered questions ranging from the innovation within post-stock transfer social housing to Singapore’s international strategy to the regional impact and consequences of the feed-in tariff in England.

(Apologies again. I’ll update this post when the proper stuff comes out…)