By Admin16 February 2015No Comments 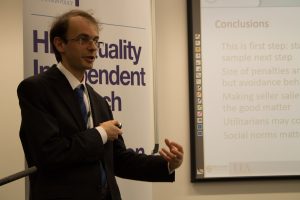 The simple answer to the question of why people may engage in unlawful downloading is that it is free. Undoubtedly there may be legal risks involved but the evidence as emerging from our previous scoping review (Watson, Zizzo & Fleming, 2014) is sufficiently unclear, that the choice to engage in unlawful downloading is not as straightforward as it may seem. This is because the existing evidence base is patchy and is particularly problematic in determining causality.

We have recently run an economic experiment (jointly with Melanie Parravano) trying to get at least a preliminary causal understanding of the role of three possible candidates of unlawful downloading: financial and legal concerns, moral concerns and social norms. The consumers had three choices – not to buy, to buy or to obtain without paying. In this case buying represented a gain to the consumer, because if you choose to buy something, it is assumed to be worth more to you than the monetary cost. If you choose to buy then some of the money you pay goes to the seller. The choice to obtain without paying has a higher benefit to the consumer – because you are getting something you would be prepared to pay money for, for free. However, in this study this choice carried a financial risk to reflect the possibility of being caught.

This work was informed by the work of Nobel prize-winning economist Gary Becker. He suggested that criminals were not necessarily bad people – it could be a rational choice to commit a crime if the benefits outweigh the risks involved. One implication of this view is that likelihood and severity of punishment should reduce crime rates as it tips the balance against the possible benefits. Our preliminary results support Becker’s work because obtaining without paying was reduced as the penalty became more likely and severe. This suggests that in the real world people do not ignore risks and punishment; rather, when these are high enough, the less-than-clear nature of the real world evidence suggests that people may learn to avoid the legal barriers introduced by new legislation, at least with time.

We did find that moral concerns matter. Being aware that there is a seller being damaged reduced unlawful downloading, and even more so – by around 5% – if consumers were aware that sellers made an effort. There is a clear implication that raising awareness of the seller and their effort in producing goods should reduce unlawful downloading.

Social norms, however, matter more than moral concerns. We have found that they very closely follow consumers’ actual behaviour. When unlawful downloading was rated as socially inappropriate, it was hugely reduced. This carries a clear implication for industry: for example, socially focussed marketing messages could reduce file sharing by presenting it as unacceptable and raising awareness of social norms not to file share.