By Andrew McHugh12 January 2015No Comments 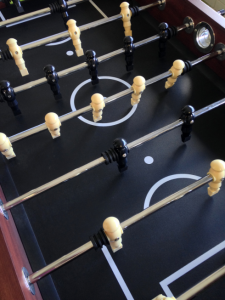 It has been fascinating to see how resilient and adaptive the dominant Pay-Tv beast in the UK market has been in the light of this shift. Over the years they have seen of various challenges from ITV Digital (remember them!), Setanta and more recently, ESPN.

Yet Sky faces challenges on a number of fronts. BT Sport has the advantage of being a broadband digital company, with deep pockets, strong brand profile and, crucially access to millions of homes already. From next season don’t look for UEFA Champions League group matches on terrestrial television or even on Sky. BT Sport is paying almost £900million over three years to carry UEFA Champions League and Europa League matches exclusively on BT Sport. While they will make some games free to air, but the deal, a blow to ITV and Sky is statement of intent from BT and testimony to the value of football as key content.

Having paid out these vast sums, making the content work for you involves protecting your assets. For the FAPL and rights holders the issue of policing differing types of football content continues apace as new ways to share content evolve. The FIFA 2014 World Cup in Brazil saw the growth in vines being used on micro-blogging sites such as Twitter (which owns the company) as fans started posting vines (6 second looping videos) of goals from the tournament.

In recent months the FAPL announced a clamp down on the usage of these vines showing goals from that league. They argued that it infringed copyright and was thus illegal. Other areas of the television industry are happy to use vines to promote content and brand identities. The BBC has been seen clips from Strictly Come Dancing prove popular on Twitter generating 1.4m views in a month while companies such as Grabyo have entered partnerships across sports such as tennis (with Wimbledon) and broadcast rights holders to exploit the grow of social media.

The FAPL legal situation is far from clear cut in with the suggestion that fair dealing may be one defence to posting vines. While the growth of vines may impact on the value of the clips rights package that the FAPL had sold to the Sun and The Times newspapers, you could also see in future the FAPL focusing on getting the best promotional value out of these rights as opposed to simply getting revenue, given the gap between this £20m clip deal and the importance of maintaining the core broadcast deal.

It can often appear that debates about the copyright regime are crudely distilled so that on one side of the argument are those calling for increased liberalisation particularly curators and aggregators of content – and at the other end of the spectrum calling for more rigorous policing are organisations that represent content producers. In the case of sports rights I would argue that this polarised critique masks a myriad of more complex and nuanced aspects of the position of IP within the sports rights arena. Of key importance in shaping attitudes are the existing scope, scale and value of your rights and your position in the value chain as you look either up or downstream.

A notable characteristic of the sports media environment has been that it has often over the decades been at the leading edge of technological change and media innovation. New partnerships and the development of alliances between sports organizations and digital content managers and platforms is evolving at pace in this sector already. The legal and business challenge is to find an arrangement that allows fans to do what they want to do; share content, while not endangering the value that helps to sustain such industries in the first place.

Be assured the technology will only develop apace. Perhaps a case of new rules please?