By Andrew McHugh28 November 2014No Comments 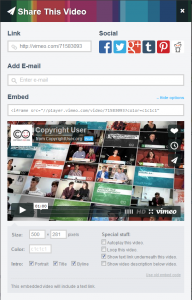 Philippa Warr explores the recent ruling of the European Union’s Court of Justice which states that embedding videos containing copyrighted material does not constitute copyright infringement.

The European Union’s Court of Justice has issued a ruling on 21 October 2014 which states that embedding a video containing copyrighted material does not constitute copyright infringement.

The ruling on the case BestWater International GmbH vs Michael Mebes and Stefan Potsch has yet to be published in English, but it is available in French and in the official language of the ruling (German) on the court’s website. The basic complaint was that BestWater (a producer and distributor of water filters) objected to the two sales representatives (working for competitors) embedding BestWater promotional videos on their own websites from YouTube.

The case involved Article 3, paragraph 1 of Directive 2001/29/EC, which seeks to harmonise aspects of copyright in terms of how it applies to the information society. Specifically, it states that: “Member States shall provide authors with the exclusive right to authorise or prohibit any communication to the public of their works, by wire or wireless means, including the making available to the public of their works in such a way that members of the public may access them from a place and at a time individually chosen by them.”

One interpretation of that directive (taken in isolation) is that the creators of the content would be free to set limitations on how their work is being used. The court decided otherwise and stated:

“The embedding in a website of a protected work which is publicly accessible on another website by means of a link using the framing technology … does not by itself constitute communication to the public within the meaning of [the EU Copyright directive] to the extent that the relevant work is neither communicated to a new public nor by using a specific technical means different from that used for the original communication.” [1]

The ruling hinges around the use of inline frames or iframes. Iframes are a way of seeing content from another site on your own. The external content is visible within the frame and looks like it’s part of your own site but you aren’t hosting it yourself – essentially it’s a browser within a browser. If it gets taken down from the source it will disappear or be unavailable from your own site.

YouTube actually offers an embed option on each of the videos it hosts by default, although you can manually switch this off. It’s this option which the defendants were using to host BestWater’s content.

The point about embedding not constituting the communication of the work to a new public is key. One of the advantages of allowing embedding on your videos is that they are circulated more easily and thus (hopefully) reach a wider audience than the original would have done. But the new eyeballs wouldn’t constitute a new public. As this ruling implies, their potential viewership was already accounted for when BestWater made the material publically available online.

The ruling references Svensson and Others vs Retriever Sverige AB – a case regarding online newspaper articles and a website which recommended and offered clickable links to those articles – in support of this interpretation. [2]

The implications of this ruling and related decisions are important. The decision rendered suggests that websites may feature a huge variety of copyrighted content without being made liable for any infringement. That’s because iframes aren’t just used to embed video content. They can be used for pretty much anything, including image and audio files.

Sometimes embedding is with the rights holder’s permission. Getty Images actually offers an embed tool for its photography which ensures that images are correctly attributed on social media and blogs and that the photos link back to Getty’s own site – so that they can be easily licensed for commercial use. Other times, permission is not sought. An image that’s been licensed by a news site and appears on a publicly available webpage could be hosted on another site using frames. It still generates a page view for the original site but it means the image is appearing on a site which did not pay for the license and without the commercial benefits you’d expect from someone actually visiting your site. In the second scenario there are also knock-on effects for the rights licensing model – for example, one single news site could end up paying the licensing fee for a set of images while the rest simply embed the licensed content. It’s the same with audio files and other types of copyrightable content.

There are also considerations when it comes to the illegal uploading of copyrighted content. Embedding offers a way for a website to offer contentious or illegal content without the website staff actually hosting or uploading it themselves. If the material gets removed or censored at the source it will, of course, disappear from the embedding website too. Until that point though, embedding offers a way of amplifying the effects of illegal content uploads.

This isn’t a new phenomenon in any way but it bears remembering in this context. The reason for that is the BestWater ruling doesn’t actually touch on whether absolution from copyright infringement when embedding would apply regardless of the original material’s legality or whether it is reserved for legally uploaded content only.

Essentially, if in the EU embedding copyrightable content on a website is generally considered legal because the original material appeared on a public internet site, there will be significant ramifications for rights licensing structures as well as potential implications for the circulation of illegal content.