By Sukhpreet7 August 2014No Comments 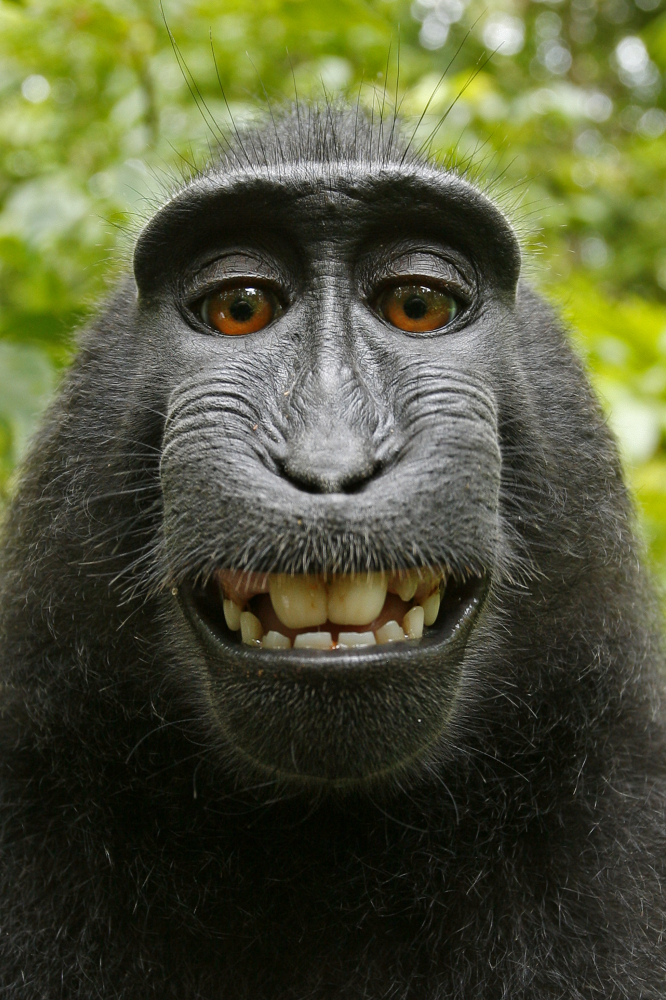 This week saw the return of the ‘monkey selfie’ story. A British wildlife photographer was photographing crested black macaque monkeys in Indonesia when the monkeys began to show an interest in his equipment and started taking pictures of themselves. One of the photos found its way on to Wikimedia and the photographer threatened to sue for copyright infringement and damages.

Wikimedia put it to a community vote and eventually refused to take the photo off the public domain section of the website Wikimedia Commons. So, if the monkey took the photograph, who really owns its copyright?

The Copyright, Designs and Patents Act 1988 (CDPA) states in s.4(1) that an artistic work means, among other types of work, “a photograph,…irrespective of artistic quality”. Photographs which are ‘selfies’ are not new; rather they have become more popular with the widespread use of smartphones. The Oscar selfie earlier this year is a classic example; this was a product of Ellen DeGeneres’ creation, bringing together top celebrities into one frame of a photograph, thereby making an original work (it is highly unlikely that photos including all of these celebrities exist). You could argue that the level of skill and intellectual creation is fairly limited, but it is an original work nonetheless and qualifies for copyright. Does the monkey’s selfie differ, then, from the Oscar selfie? Particularly as the photograph was not actually taken by Ellen DeGeneres? The problem with the monkey selfie is that, although it is original in the starkest sense of the word, there appears to be little intellectual creation, skill and judgement (although how can we criticise the monkey, given that it can’t tell us..?!), unless the shot was set up by the photographer in some way, adjusting settings, focus, filters and so on to capture ‘true’ likenesses. Additionally, if the photographer has adjusted the image using Photoshop (see the Red Bus case which continues to perplex lawyers), an element of intellectual creation, skill and judgement could be argued.

But what about the question of authorship? The author, as defined by s.9(1) of the CDPA, means “the person who creates [a work]”. On first glance this would appear to be the monkey, who quite literally ‘created’ the work when it touched the trigger and set off the camera. However, animals cannot be authors according to the CDPA, and therefore their works are not subject to copyright. So is there actually a copyright owner in the work, or is the photograph not subject to copyright at all and therefore public domain?

Could it be argued that the photographer did not actually create the work because he did not take the photo? It’s not quite as simple as that. Although the CDPA does not go into further detail about the author of an artistic work, experts suggest that the author “is the person who made the original contribution and…need not be he who pressed the trigger” (Laddie, Prescott & Vitoria, The Modern Law of Copyright and Designs, 4th ed, 4.61 p.254). ‘Original contribution’ in this sense can take several forms: there may be originality, for instance, in the use of angle, filters, light, exposure, and so forth which create a photograph. There may be originality in terms of the creation of a scene or subject to be photographed; this certainly is the case in the Oscar selfie, but may also include the set up and control of the illumination of the subject. Or it may just be a ‘right place right time’ type of originality, the photographer capturing a scene because he made a special effort to go and find it. In this respect, the wildlife photographer would appear to qualify as at least a contributor to the photograph. There is an added complication that allegedly the monkeys found the camera by accident and that the photographer did not set up the shots, but even so the serendipity aspect of originality cannot be completely ignored.

It’s a fascinating debate but difficult to say, if the case ever comes to a court of law, whether the arguments would go in favour of the photographer being the author. Some commentators have argued that as there was no official creator of the photograph other than the monkey, and the monkey does not qualify as an author, there is therefore no copyright in the photograph.

Does it seem unfair to the photographer, who should probably be recognised as a contributor at the very least? Perhaps we should ask the monkey!