The Text and Data Mining exception in the Proposal for a Directive on Copyright in the Digital Single Market: Why it is not what EU copyright law needs

Martin Kretschmer at the Westminster Media Forum on Copyright and Brexit

Reform gone wrong: an Opinion by the European Copyright Society

The European Copyright Society has published a consolidated Opinion on the EU Copyright Reform Package, currently making its way through…

CREATe: a research centre at the intersection of law, technology and social science

There are only two weeks left to submit abstracts, papers and panel proposals to EPIP 2016, the 11th Annual Conference…

The Quest for Balance in CJEU Copyright Jurisprudence, as explained by Judge Malenovský

On 15 January, at a conference of ALAI Belgium (Association Littéraire et Artistique Internationale), Judge Jiří Malenovský of the Court of Justice of the European Union (CJEU) bravely faced a public of copyright scholars, many of whom had extensively raised concerns about decisions of the Court in their academic outputs. Malenovský is the Reporting Judge of a vast majority of copyright cases before the Court (analysed in CREATe’s study “Is there an EU Copyright Jurisprudence: An Empirical Analysis of the Workings of the European Court of Justice”). As far as European Copyright is concerned, he is The Copyright Judge.

This Annual Conference of ALAI Belgium focused on the principle of ‘communication to the public’, whose complexity was not only stated but also demonstrated by the delivered presentations. Crucially, these learned contributions did not hide their disappointment at the scarce enlightenment provided by the EU Court on the concept. Judge Malenovský’s talk, delivered in French, concluded the conference, and in his detailed defence of the Court, he set off to refute these criticisms, by explaining why and how the Court reached its conclusions.

The European private copying exception under Art. 5(2)(b) of the 2001 Information Society Directive, and its varying implementations among EU…

European Copyright Society on copyright limitations and exceptions in the light of the parody case ‘Suske en Wiske’ (Court of Justice of the EU, Case C-201/13, Deckmyn)

“Copyright Education and Awareness” – CREATe and CopyrightUser.org in a report by Mike Weatherley MP to the Prime Minister

Post by Bartolomeo Meletti, Lead Producer of CopyrightUser.org [a co-production between CREATe, University of Glasgow and Bournemouth University] 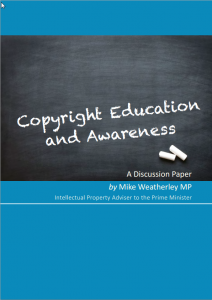 On Friday 10 October 2014, Mike Weatherley MP stood down from his role as Intellectual Property Adviser to the Prime Minister. On the same day he published the third and final report produced in his capacity as IP adviser: Copyright Education and Awareness. Following two copyright papers called Search engines and Piracy and ‘Follow the Money’, Mike Weatherley’s latest contribution considers copyright education and awareness activities in the UK. It also offers a number of recommendations with the goal of achieving “[g]reater coherence and coordination between industry, Government, academia and all other relevant stakeholders to deliver an effective positive message about the importance of IP to all our benefits”. Several recommendations explicitly address CREATe and in particular the project CopyrightUser.org.